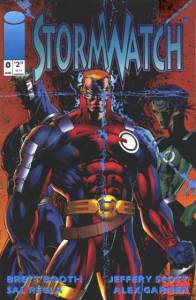 “StormWatch” is a book that never seemed to give a damn about any marketing gimmick that it was supposed to participate in. Take the concept of a 0 issue. Image comics came up with this strategy, their first comics published would be a number 1 issue, but it wouldn’t burden you with backstory, instead it would get right to the action. The backstory would come at a later date via the 0 issue, and they would also be set before the events of the number 1 issue. But no, not “StormWatch,” “StormWatch” is too good for all of that! While the 0 issue of “StormWatch” would have a boat load of backstory in it, it also couldn’t be read prior to the events of the first two issues (and due to the writing, issue 3 as well) lest you spoil the death of Mr. Windsor.

This book opens with Jackson and Fuji fighting in a Danger Room-Holodeck kinda thing. “StormWatch” at its worst is just a mash-up of “X-Men” and “Star Trek : the Next Generation.” Which is another reason I probably liked it so much as a kid, because both those things are super rad! I say “worst” because it is taking a lot of those elements and not doing anything really interesting with them. Also, Danger Room’s for anyone but the X-Men are super lame. Hell, I even think the one the X-Men have is lame, and makes for lame story openers. I can only suspend my disbelief so far before I feel insulted, and the Danger Room/Holodeck in “StormWatch” is one of them. Just let the X-Men be the X-Men and have their Danger Room, and even though you’re super sci-fi “StormWatch” leave the Holodeck to ST:TNG. Smack each other around in a gym or something, I dunno, just always comes off as super lame.

While this lameness is going on there’s a group of terrorists on a small space ship approaching SkyWatch. They have a cloaking device; they attach their ship to the side of SkyWatch and then literally break in. The main dude, Tony, of this group, has a grudge against Jackson for messing up his brother during a StormWatch mission years ago. We cut back to the ’70s where we see StormWatch in its younger days, presumably not long after John Stone left when the organization was known simply as S.T.O.R.M.

We meet Jackson on a treadmill talking smack with another early StormWatch member known as Flashpoint. This is all being egged on by Windsor. Jackson mentioned how great Windsor was, and we know he died a hero, but he comes off very douchey here. We also learn that Flashpoint has the same bad attitude as Canon, there’s always one on every team. We go to a wider shot and see another member of StormWatch Prime, Nautika, not just the team girl, but also the team member without a nose.

We see the mission in which Jackson, Flashpoint and Nautika are being lead by Backlash against a group known as the Third World Liberation Front. Of course this is the group that Tony was in at the time with his brother Pedro. They were breaking into a government facility to steal information for Ivana Baiul, who is trying to get her “Project Genesis” started at I/O, for now looking at “seedlings” before switching to “gen-actives.” Jackson freaks out at Pedro and pretty much mind wipes him. This was the reason why Tony was out for revenge. This issue was the first that let us meet other older StormWatch members other than Jackson and Backlash. One more will get squeezed in soon, so be prepared to add one more member to the family tree.

When we get back to the present in issue 4 we see a StormWatch scout ship checking the perimeter of SkyWatch as we wouldn’t want any more space jock terrorists breaking in! The scout ship finds a piece of a Daemonite ship that got partially through to Earth’s atmosphere due to the events of “Reunification Day” AKA “WildC.A.T.s” Vol. 1 issues 0 – 4. It should be noted, these Daemonites are tough, they’ve been floating in space from April ’92 – Sept. ’93. Of course the Daemonites take over the SkyWatch workers and infiltrate SkyWatch.

Meanwhile we see Backlash trying to work up the nerve to propose to his girlfriend Diane LaSalle. He wusses out, way to go Slayton! Wouldn’t you know it, the Daemonites run into LaSalle and one of them takes her over but not before she sounds the shipping alarms. While “riding” LaSalle the Daemonites find out about the WarGuard. The WarGuard was a group of scientists that were on a satellite when the magic comet passed by the Earth. Being so close to the comet they got stronger powers and went crazier than seedlings on Earth. The WarGuard were locked up on SkyWatch for the safety of humanity. With the Warguard now on the loose, hosting Daemonites, we know StormWatch is in some serious trouble.

While StormWatch goes up against the WarGuard, Backlash is trying to figure out what had gotten into LaSalle. Hint: it’s an alien (I mean besides… wait… I’m too mature to make this joke.) He electrifies her with one of his little whippy things which separates LaSalle and the Daemonite. The blunt separation sends LaSalle into a coma. The WarGuard tumbles out of a SkyWatch window and for some reason everyone just assumes they’re going to burn up on re-entry. Not sure why, but we have to get to seeing a super sad Backlash with LaSalle in the medical lab of SkyWatch, so no time for worrying about possible future plot lines.

It’s important to note that the public at large has no knowledge of the Kheribum and Daemonite war, or even their existence. This is all a shock to StormWatch, who usually deal with human and super-human problems on Earth, not aliens in their space home. We know a bit more about what’s going on with LaSalle than the team, and that’s cool. Tight continuity and world building is front and center as well as seamlessly integrated for both of WildStorm’s lead titles.