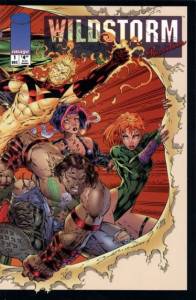 This is the only original story that was in “WildStorm Rarities.” It’s like when a band puts a new single on a greatest hits album. Fine, the completest in me will buy it… but I’m not happy about it! Actually, that’s not entirely true, until “WildStorm Rarities” came out I had never seen the prolog to “the Kindred.” Other than that though, I had all the other shorts tracked down, but I can see how difficult that could be and why others wouldn’t.

Anyway, we see Jeremy, about ready to go on vacation with his ladyfriend Brooke. They’re at an airport, which I can only assume is in New York, and it is snowing quite heavily.  While Brooke is grilling Jeremy on what exactly his job is at Halo, we see a plane start to get out of control on the runway. It’s headed for the tower.

Jeremy manages to shake Brooke, go all Maul and try to save the plane. To save the lives of the passengers Maul is going to need to be both smart and strong, two things he can’t do at the same time. So he keeps switching from too big to think but and then shrinking down to see his mistakes and growing again to fix them, but once again find that he was too big/dumb to consider how things could get botched. After a few tries, he gets it right, but the plane is a loss, even if the passengers are fine. Also, he assumes, his relationship to Brooke is a total loss.

Lucky for Dr. Stone, Brooke saw the whole thing and it doesn’t make a bit of difference to her that he’s some kind of super-hero. She seriously says that she’s dated weirder. Their flight gets canceled due to weather, and to giant green and purple guys on the tarmac, so they decide to spend Jeremy’s weekend off doing… other things…

NEXT: “DV8” Preview and issues 14 through 18 by Mike Heisler, Tom Raney, Jason Johnson and Randy Elliot