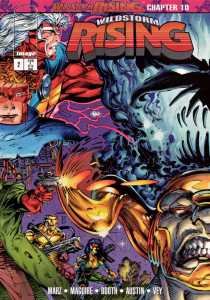 Alright, let’s wrap this crossover up! Slayton gets a call from Diva at StormWatch. He gets into his Backlash gear and meets up with her at Jackson King’s grave. She catches him up on the plot of “WildStorm Rising” and states that someone needs to take down Helspont. So off Slayton goes, solo even, without even thinking much about it. Turns out, it’s trick! A tricky trick! That was actually Mr. White posing as Diva and it’s all part of a plan from Defile to keep Helspont too busy to be nosing around for that Daemonite ship in Nicaragua.

So Slayton is fighting Helspont. Turns out, he’s not as easy to beat the hell out of, like every other weak ass Daemonite that Slayton’s fought. Slayton’s no slouch either, but despite surprising Helspont a few times, Slayton basically gets his ass kicked on Helspont’s submarine and gets left in the drink. Lucky for Slayton he gets saved by StormWatch, who is consisting of StormWatch teams 1 and 2 as well as members of StormWatch Prime. StormWatch just got permission from the U.N. council to try and stop Helspont so they’re going after that jerk as well. Even though Diva is confused at first when Slayton tells her that she asked him to fight Helspont the first time, she takes him along to go and kick Helspont’s booty as part of a team. StormWatch loses that fight. Helspont’s tough, yo!

In the midst of the ill-fated fight against Helspont, Christine is trying to justify going after him to the StormWatch UN Council. None of Council think that the team can take down a mean bastard like Helspont. I mean, they’re not wrong… The Council, in their infinite wisdom, decide to release WarGuard and Despot to deal with Helspont. Because having the WarGuard run free has always worked so well in the past. Despot and the WarGuard immediately fuck right off of SkyWatch saying “Ain’t my fight, bro, laters. Hey, formally frosted fiendish friends, let’s go hang out on the dark side of the moon for a bit. From there we will plot the future demise of StormWatch!”

The StormWatch team isn’t done licking their wounds before they decide they still need to pursue Helspont. Helspont’s in his submarine headed toward Nicaragua, as soon as he gets out to get the lay of the land StormWatch is getting ready to pounce. But what’s that? On the horizon? Is it? Could it be? Yes, it is! The WildC.A.T.s and WetWorks teams along with Cole and Cray! And in the middle of them all, is Savant, Majestic, and Union unearthing the spacecraft. Only, uh-oh, it’s not the Daemonite ship, it’s the Kherubim ship! Whomp whomp.

So now, everybody fights. Well, to be fair, the good guys aren’t fighting each other this time. They’re just taking on the Daemonites. Hightower’s goal is just to get on board the ship and peace out, but he’ll kill anyone to get on it. Defile and Helspont still want the ship to use it to dominate Earth. Spartan is having those same thoughts and boards ship to use its weaponry to help in the fight. Defile shows up to stop Spartan and orders the brainwashed StormWatch Prime members to kill Spartan, then each other. They’re successful in taking down Spartan, but Sunburst starts to kick Defile’s control and Nautika breaks his spine before she comes out of the fog. Meanwhile, Cole kills Hightower, rushes to the ship and lands a hit on Defile. Defile has had enough of this noise and messes with ship’s core and takes off. Whatever he did to that ship has made it so that it’s gonna blow-up. Big time. Right in the middle of our heroes.

Jacob is not having this blood on his hands. He’s going to board that ship to get far enough off planet to save everyone on the ground. Jacob is no dummy, he knows it’ll take a Kherubim Lord’s authority to launch the ship, but he needs some help because he’s lost the rest of his Kherubim technical know how to street livin’ and booze. Zealot is the first to volunteer as she remembers a lot and is the only one who knows how to pilot the ship. After that, all the rest of the WildC.A.T.s opt to get on the ship. The ship takes off, Void promises to teleport everyone off if something goes wrong and they can’t keep the ship from exploding. Then the ship explodes. No WildC.A.T.s members are found teleporting out. Everyone leaves upset except Cole, he’s just upset.