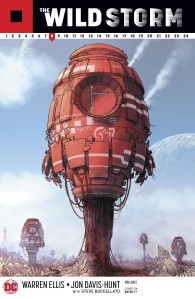 I know, the main point of this blog is to talk about the continuity of WildStorm Universe as it was from ’92 – ’11… but I really like doing this compare and contrast thing! Admittedly, I have no idea where Ellis is going with this new series, and honestly, I couldn’t be more on board for what he and his team are bringing. I just thought I’d have some fun, point out some of the references/differences from the old WSU to the new book “the Wild Storm” that came out earlier this week.

Shen is back, she has… uh… not real wings now. In the old WildStorm continuity, she had wings and could grow talons, basic bird powers. These wings don’t seem to be real, but a manifestation of the hallucination she uses to introduce the Bleed to, so she can fix them. She’s also the Doctor again like she was at the very end of the old WSU. Also, she’s in Amsterdam meeting Jenny for the first time, much like where our most famous Jenny & Doctor (Ms. Sparks and Jeroen) met for the first time in the old WSU.

the Doctors
Looks like past Doctors are still in the Garden of Ancestral Memory, or as Shen calls it “their own private Heaven,” and are still there as for council for the current Earthbound Doctor. Not seeing too much difference in their function of helping and healing humanity, only different faces that we saw in the old continuity.

One of the past Doctors mentions what Jenny is and refers to the type of person she is as “Them” and how they are around to protect the world as a planetary defense mechanism. They also talk of the rarity of this group and how they’re always an indicator of trouble ahead. In the old WSU we had a group known as “the Century Babies” who were all born on Jan 1st, 1900 (except one born on Jan 1st, 1901) and were to protect humanity. Same concept, but unnamed in the “the Wild Storm.” Jenny Sparks was the first Century Baby we knew on the old WSU, and the next most known would be Elijah Snow (there was a handful more, each with a different function.)

Jennys
So yeah, Jenny has been outed to be a techne, a spirit of the mechanical arts. When Shen ventures into Jenny’s conscious I think we see past Jenny iterations from throughout time.

There’s no way this is the new version of the Metropolitan from “the Monarchy” is it? I mean, they’re both pretty hipsterish for their times, yeah?

But no. No, no no. No way in hell. Just a coincidence…

Jacob explains in his story (more below) that he’s from an alien race that lives concurrently with differently evolved beings from the same ancestral source. He mentions that there are five of these species that traveled space as representatives of their planet. From what is said by Angela, that it explains why he is a different size and structure than John and Kenesha, we can guess that the three of them comprise at least 2 of the 5 species, if not 3. Angela knows what they look like on the inside individually, we the reader currently don’t, Kenesha and John might not be so similar under their skin. We also don’t know if Lucy is a part of one of the known species or not. So she’s either one of the 2 that we’re sure of, or she’s a possible 3rd or 4th. This leaves me of 2 minds. The first is this, if we are counting Jacob, Kanesha, John, and Lucy each as different species of the same clade collective then what would be the 5th? Is it the Daemon that we saw? Could this tie into the alien that we saw in the last issue that wasn’t quite what we know as Daemon and walked like our known Kera, Jacob? Is that their common ancestral species? We could still see the Daemon as one of the clade species, count Jacob as another, and then see Kanesha, John, and Lucy as all members of a single species leaving us with 2 more to find out about. Perhaps a new version of the Titanthropes from the old WSU?

When Shen is checking out Jenny’s consciousness she gets to a mechanical heart with two Daemons standing outside of it. Seriously? WTF? Are Daemons responsible for Jennys? 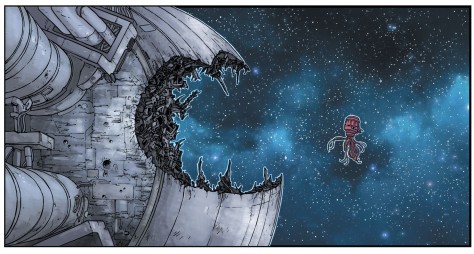 Jacob lets Angela in on his story. How he is from a species that lives side by side other linear subspecies from the same ancestral species. Also how representatives from 5 of these got on a spaceship to check out Earth. He warned of the Gaian Bottleneck which is that life rarely evolves fast enough to survive, and the reason why he and his pals ventured to Earth was the fact that they were still relatively new in the Universe and had evolved pretty quickly already. It seems that he and the other aliens he came with got stranded on Earth and so made it a point to help humanity side step the Gaian Bottleneck by helping them evolve as speedily as possible, hence why he set up Halo. It’s a big story, but we find out later there’s much more to it that he’s just not telling Angela for now.

Looks like our old buddy Cole was for sure a member of I.O. and was even in a CAT while with them. He was supposed dead by I.O. until recently. In the old WSU Cole was indeed a member of a special ops team employed by I/O called “Team 7.” No word currently if Michael Cray and Cole know each other from their I.O. days in “the Wild Storm” like they did in the old WSU.

Her name is, indeed, Jenny Sparks

That’s right. We were calling her Jenny Media, or Jenny Social, and it turns out, she’s just Jenny Sparks again, only this time she has her middle name inserted, so it’s Jenny Mei Sparks. Hey, Jenny Sparks is a rad name, I’m glad we’re going with it!

Shen’s trip reminds me of Elija Snow’s from “Planetary”