Jill is unhappy with Union. Union keeps ignoring Jill to fight crime. Jill gets more fed up and leaves his ass for a stranger she met in an alley one day. That stranger saved her from some thugs. This stranger? Oh, he’s just Regent, the bad guy from Aegena, where he and Union grew up. Yup, that Regent! Turns out Mr. Douchebag engineered the whole alley attack on Jill thing just to steal her and then beat Union’s ass. Really, when you do that, you know you’re the bad guy, right Regent? There’s no possible way you thought you were doing something positive right? But to be fair, Regent seems pretty a-ok with his evilness. Dude is owning it!

And by owning it, I mean really mean owning it! You see, Regent has killed Union’s best friend Maikone! Then he kicked Union’s booty and paraded it around NYC for a few hours before taking Union’s unconscious body and tossing it into the sea. Sounds like a real bastard, no? Not only that but like every good villain Regent monologues like a real sonuvabitch, revealing that Union really didn’t kill all those Directorate soldiers back in Chichester. That was just a failsafe that went off when Regent’s pop died. A failsafe that Regent put into his own dad’s justice stone! Union only survived because he was in the eye of the storm, so to speak.

While Union is chilling at the bottom of the ocean, we find out that Regent has not only kidnapped Jill, but he’s also kidnapped Union’s former main squeeze from back home, Eliya. He’s holding both of them captive on his secret hidden base, in outer freakin’ space! Eventually, Union’s justice stone wakes him and leads him to said space base. That’s when all hell breaks loose! 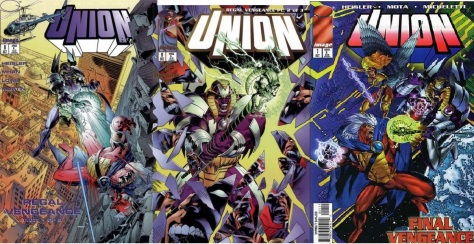 Union goes in hot, and after a rocky start is holding his own against Regent. Meanwhile, Eliya and Jill get loose from the cages Regent was holding them in. Regent decides he’s not going to stand for a lowly Protectorate beating him up, so he tries to implant a second justice stone on this body! This just gives him more than he knows what to do with and Regent just starts blasting everything, resulting in ripping his satellite of loserdom apart. In the middle of this Regent tries to teleport away, but due to the doubled up justice stones he becomes some kind of portal/gate/black hole and sucks up everything, including Eliya, right in front of Union and Jill, who remain unharmed and unsucked up.

Union and Jill return to Earth and decide to live off the fake rich playboy life that Regent had constructed for himself. It’s not much, but it’s all they have except each other. And with these two, it’s a guess on how long that’s going to last.

NEXT: “Cybernary” volume one issues 2 through 5 and “Cybernary : the Price” by Steve Gerber, Jeff Mariotte, Jeff Rebner, Richard Friend and John Tighe