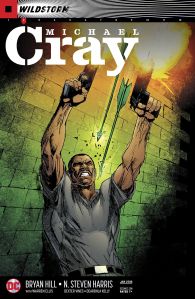 I know, the main point of this blog is to talk about the continuity of WildStorm Universe as it was from ’92 – ’11… but I really like doing this compare and contrast thing, and frankly, looking at the view numbers, you readers do too! Admittedly, I have no idea where Hill, Harris and Ellis are going with this new series, and honestly, I couldn’t be more on board for what this team is bringing. I just thought I’d have some fun, point out some of the references/differences from the old WSU to the new book “Michael Cray” that came out earlier this week.

Back in the old WSU Hector was a member of the DV8 team and he had the power to turn emotions into muscle mass. Basically, toss hate his way, he’ll grow big and kick your ass. This version of Hector is coming across as much more of a master thinker, to lay traps for an enemy, or at least guide them into one. Basically, a good tactician. This version of Hector seems not to be a clone, as far as we can tell. The new Hector does seem to keep a similar hairstyle to the old one, too.

Leon was also a member of the DV8 team in the old WSU and had the power to remove heat, super-cooling areas. Almost like ice powers, but not quite. This new version of Leon seems to be another military tactician type like the new Hector is, but Leon on specializes in predicting how an enemy will be attacking. Honestly, he’s the one we get very little hints about. Other than the look and powers, this new Leon could very well be like the old Leon for all we know, that is to say, pretty loyal and level-headed who garners the respect of his co-workers easily.

Victoria was better known as Flint in the old WSU and was a member of StormWatch and StormWatch : Team Achilles. Her power was that she was strong and could not be hurt. The only thing that harmed her was acidy spit from a Xenomorph, and that only even left a scar. This new version seems to be a good shot a bit more sarcastic and is bold enough to follow Cray.

Who is she? Should we know her? I’m not placing her at all. She’s totally a character to keep an eye on. Hell, Christine even tells Cray the same thing! Coincidently enough, Dr. Shahi features a prominant scar on her cheek, much like the old WSU version of Flint did.

We meet a young woman who introduces herself as Queen’s sister, and then admits that they are not actually biologically related. I’m not sure if this is supposed to be Thea or not. Based on the last issue I’d thought Thea was a maid type, if this is Thea, then she is someone who is like a sister to Oliver that he can trust to do his dirty work. Meaning this version of Thea is possibly more of a cross between Thea Queen from “Arrow” and Mia Deardon from the DCU than simply just a version of one of them.

Michael’s Team
Looks like we’re getting Michael’s team together! No sexy ninjas though. I wasn’t sure if they’d all be new twists on old WSU characters but was pleasantly surprised that they all were.

This is more of a half-answer at best. We’ve seen Michael’s powers go off a few times. In both of the instances that involved a living being (Jacob and that poor mouse), it seemed both surprising to him and caused an explosion. When he uses it on Oliver it doesn’t seem as surprising to him and Oliver’s arm doesn’t explode, it just catches on fire and disappears, much like that cup did back in “the Wild Storm.” Is Michael gaining some kind of mastery over his powers? Is he coming to expect what sets them off? Can he control if it is a big explosion or just a tiny disintegration? So yeah, a bit of an answer, but a lot more questions!

He’s a bad cop. I’m sure we’ll be finding out more about him in the next issue. Barry Allen is the Flash in the DCU, a speedster, who, yes, works for the police department. I may be wrong but he seems like a regular cop type here and not a forensic investigator.

When Christine is talking to Oliver’s sister at the end of the issue Christine compares the girl to a seed. Christine states that she’s planting the girl to see what grows. More than just a pretty metaphor, it is a reference to the old WSU version of Christine, where her power was activating superpowers in beings known as “seedlings.” Christine and seeds, no matter the universe those two things go hand in hand.