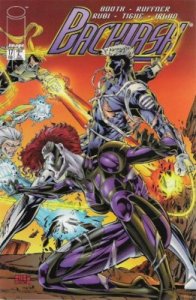 Slayton is feeling odd ever since he woke up to save the day against that space-vampire. Where can a guy go to see what’s up with his crazy bod? Why not the guy who’s been like a doctor to you for the last several years? That’s right, Slayton drops in on his old pal Link from StormWatch. Link is happy to oblige, as well as meet Jodi and Amanda.

As soon as the tests are concluded StormWatch shows up to… well I guess to take Slayton in for being a wanted felon. Not only that, but they’re none too keen to find out that Slayton had, at some point, been funneling information about StormWatch to I/O. They even accuse him of being glad that LaSalle is dead because she was on to him. But ultimately the StormWatch team cannot take down the man who trained them.

While Slayton was taking down the StormWatch kids, Amanda and Jodi were busy stealing their transport ship. As soon as Slayton is finished with Jackson, Link tells him to get the heck out of there, so Slayton, Amanda and Jodi fly off in their ill gotten jet. The flight doesn’t last long as Slayton gets a call from Cray to meet up with the other Team 7 members in New York. Now if Slayton had thought to ask Cray, he would’ve known that kids were invited to this party, but he didn’t and so he drops Amanda and Jodi off at the nearest payphone and leaves.

Amanda calls up CyberJack to get back to the safe house and hears that he’ll be staying in Gamorra longer than previously thought, but they are free to stay at the safe-house as long as they need. Amanda immediately picks up on the fact that there’s something wrong with this message. In it, Jack calls her Taboo. Jack never calls her Taboo. This can only mean one thing: Girls Weekend Trip in Gamorra!

I wish I had more to say about these issues, but really, unlike other “Backlash” stories there isn’t too much going on plot wise. Character development wise? Yeah, it’s in there. Seeing Slayton have to take on his former students? It’s rad as hell, especially when we have Rubi and Booth drawing it for us. But when it comes to a the type of recaps I do here, it looks a lot more slight than the book actually is. I have to say, it was really fun to see StormWatch vs. Slayton before we get to “Fire from Heaven” and it’s StormWatch vs. Everyone for a bit. It’s like a preview of what’s to come.

NEXT (if you need to get back to “StormWatch” 34): “StormWatch” volume one issue 34 by H.K. Proger, Renato Arlem, and Joe Pimentel.