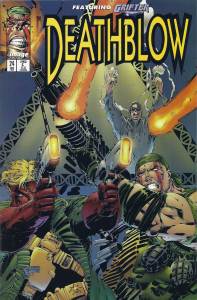 Last we encountered Michael Cray he was hanging out with Jackson Dane and they’d just finished their team-up with old Team 7 pal Marc Slayton. They figure that next on the Brethren’s the hit list will be Cole Cash. Not the worst assumption, as there are only so many other Team 7 members to go after, and I/O knows that Cash is as active somewhere as Cray, Dane, Lynch, and Slayton have been. As far as I/O knows Fairchild and Chang are dead, and they took out Callahan themselves.

Now Cash thinks he’s going to get some time to chill out in NYC now that he’s home. No sooner does he turn on the television he gets a call from Alicia Turner. She’s letting him know about Craven sending the Brethren out for him and they plan to meet up later. As soon as Alicia hangs up she’s taken hostage by the Brethren and Double-Take morphs into her to try and pull the same trick on Cash as they did on Slayton. While Cash is headed towards that ambush, Cray and Dane make it to Cash’s crash pad and find it crawling with I/O agents ready to kill. They eventually get the info out of one of the I/O assassins about the ambush and rush to save Cash.

The meet up is at Union Station and as soon as Cash talks to “Alicia” he knows her to be a fake. However, it is four on one and Cash gets knocked down and has his Gen-Factor stolen by LeGauche. Just as the Brethren are leaving, Double-Take wants to get revenge on Cash for decking her when they met. She doesn’t get a chance before Cray bursts in and murders her. The Brethren beat feet as Cray and Dane gather up Cash and head for drinks at the Drop Zone. While hitting a few brews the boys catch Cash up on what’s going on with Craven and the Gen-Factor theft. When mention of Gabriel Newman comes up the three of them decide to find out where he is so they can pay him a visit.

Meanwhile, Craven is getting the Gen-Factor samples all ready to be sent off to Kaizen Gamorra for the mysterious Project Renaissance. It seems that Craven is willing to trade state secrets for the technology that Kaizen can provide. Also, it looks like Craven is willing to team up with Kaizen to take over the world if all goes according to plan.

Cray has called up his old pal Rayna Masters and asked her if she can find out where I/O has been hiding Gabriel. Turns out he’s in a secret I/O prison on Plum Island. The trio manages to con their way in and confront Gabriel.

Gabriel’s prison is quite nice, a pretty swanky apartment suite, with the exception of one of the walls being thick plexiglass. Gabriel immediately notices what is wrong with the Team 7 members and decides to unload upon them all his secrets. He lets them in on the fact that he wasn’t part of starting Project: Genesis, he just took over after Dr. Tsung left because he was fearful of Craven’s goals. Dr. Tsung only left notes and a few Gen-Factor samples, he took most of his knowledge and the Gen-Factor source with him. Gabriel then lets Dane and Cash in on the fact that they will die soon without their Gen-Factor, and that Craven needs it to stay alive because that old bastard is finally dying. He also lets it slip that Craven is working with Kaizen Gamorra to meet his goal.

The boys are all disheartened at their impending mortality. Well, more so than usual. Cash swears he’s going to blast a hole through the plexiglass and another one though Gabriel. Cray manages to convince him that Gabriel isn’t worth it, against Cash’s better judgment. But after Cash and Dane have left Cray slips Gabriel a gun through the plexiglass food-slot saying that “a condemned man’s entitled to a last meal.” Which is really goddamn dark even for this book! Gabriel recites some lines from a Yeats poem and ends his life.