I know, the main point of this blog is to talk about the continuity of WildStorm Universe as it was from ’92 – ’11… but I really like doing this compare and contrast thing, and frankly, looking at the view numbers, you readers do too! Admittedly, I have no idea where Hill, Harris, and Ellis are going with this new series, and honestly, I couldn’t be more on board with what this team is bringing. I just thought I’d go over the last few issues of “Michael Cray.” 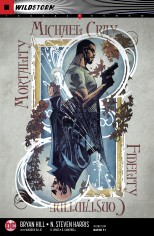 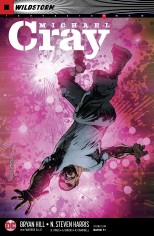 So we have a young woman named Dion Fortune. She assists Dr. Constantine and states that there are no secrets that men can hold from her. I wonder if she just took her name the historical occultist Dion Fortune, or if it could somehow be her… something to think about and watch out for!

What is in Michael’s Head and How Did it get There?
We’re still not exactly sure what is going on with the entity in Michael’s head. Dr. Constantine is treating it as if it is a demon and letting Michael know that he can help him with it. Christine lets on that she may know what it is and how Michael came in contact with it, but she’s not telling us or Dr. Shahi.

Over in “The Wild Storm” we’re currently encountering characters that have been made gen/active with the addition of Khera DNA added to their own. We’ve also seen that it gives the gen/active person a voice or presence in their head. One that likes violence and imbues superpowers unto its host. Is this what happened to Michael? So far the people we’ve seen with this affliction have been members of Project Thunderbook at I.O. under John Lynch. After consulting the old WSU continuity, the Project Thunderbook experimentees were all on Team 7. We know the old WSU Cray was on Team 7, so did the same fate befall this version of him?

We’ve seen no evidence that Michael was part of Project Thunderbook. We’ve also had Craven say that most of the people that were part of Thunderbook have left I.O. after Lynch left. So who made Michael gen/active and when? Bendix seems to know what is going on too, and even mention aliens!

We may be seeing Michael go through what Slayton and Fairchild have been through from a first-person perspective. And based on those two examples we’ve seen how things can turn out for the better or the worst.

Is the Thing in Michael’s Head Going to Make Him Go After His Father?
It’s a chilling thought and one that just might be in Michaels future.

What Happened to Leon’s Arm
Ok, we didn’t get a straight answer to this, but my boy Scott brought it up and this is what I put together. When Leon lost his arm while fighting sharks, Michael said: “Be a good boy and maybe Trelane will fix you up.” This tells me that Skywatch has the tech to replace his arm. Also, when we first meet Bendix in “The Wild Storm” it is made mention that he’s had a lot of work done to him. To our eyes, he still looks all “organic” so it is safe to assume that Skywatch can indeed replace limbs as they see fit, with them blending in exactly with how you used to look.

What Diana Prince is Up To
Diana Prince either wants to undercut the energy corporations of the world by providing free energy for all, collapsing capitalism, or she wants to bring back ancient gods. Or both. Either way, she wants to upend the world, and she’s going to use technology and magick to do so, hence why she hired Dr. Constantine. That and he tells good stories.

This version of Diana Prince is much like her DCU counterpart in that she’s a fierce warrior. There’s a slight difference in that while she’s the same as a kick-ass combat warrior, she’s also a shrewd business warrior as well. I don’t think she’s as long-lived as the original Wonder Woman, but they are both from Greece. She does not seem to be Wonder Woman in this universe, as there’s a fictional and marketed Wonder Woman as evidenced by Jenny Mei Sparks’ bed sheets.

One Last Thing
Damn do Ross Campbell’s colors make everything look exquisite! I mean no disrespect to the previous colorists on this book, but damn Ross Campbell is adding so much to what N. Steven Harris and Dexter Vines are putting on the page!