I know, the main point of this blog is to talk about the continuity of WildStorm Universe as it was from ’92 – ’11… but I really like doing this compare and contrast thing, and frankly, looking at the view numbers, you readers do too! Admittedly, I have no idea where Hill, Harris, and Ellis are going with this new series, and honestly, I couldn’t be more on board with what this team is bringing. I just thought I’d go over the final few issues of “Michael Cray.” 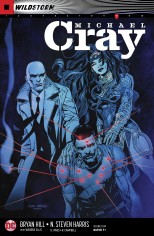 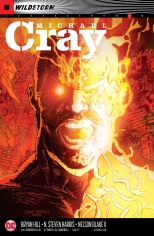 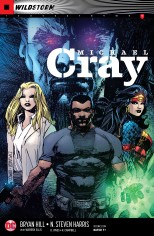 The Khera inside Michael

This was covered a bit my coverage of the main “the Wild Storm” book, but what has been talking to Michael, and what is indeed in his head is Khera. They are totally different than the Kherubim from the old WSU, these are shapeshifters that can take on a human look, but here we see one that is “naked.” Also, as laid out in “the Wild Storm” is the fact that there are I.O. soldiers that were part of Project Thunderbook that have been given grafts of Khera DNA, resulting in powers and seeing or hearing the Khera talk to them. That’s what we’re seeing represented.

How exactly the Khera got inside Michael

The Khera claims that he got inside Michael because Michael was “close” when he needed someone, and Michael was a severely injured “disposable” soldier. While this doesn’t exactly track with the other folks we’ve met over in “the Wild Storm” that have some Khera DNA in them, we can make a few inferences. We do see Michael entering some kind of surgery at the hands of the military. I suspect Michael was working for I.O. in some kind of capacity. While we have no idea how long ago this was, it would seem to me that it is post-Lynch running I.O. and Project Thunderbook would be officially closed. This doesn’t mean that there isn’t a way that there wasn’t some Khera DNA still about and somehow got used on Michael. Maybe it was the nefarious Dr. Helspont, or doctor that knew little of what he had on hand and wanted to save Michael at all costs. The reason why I don’t think Lynch and Thunderbook are involved is that he wasn’t on Lynch’s list of people to hunt down that had been I.O. test subjects under him or Thunderbook. Or then again… hear me out… in the old WSU Cray’s powers didn’t activate until much later in his life. This version could’ve been part of Project Thunderbook, was implanted with Khera DNA at some point, but nothing noticeably activated, so Lynch wrote him off, hence why he wasn’t part of Lynch’s personal mission to check up on. Later in life, his power activated, which is when we meet him. It could be that Michael’s near-death experience in the desert is what finally triggered his powers/awakened the Khera inside him. I consider the Khera inside Michael to be a bit of an unreliable narrator, so I’ll only trust what it says to a certain degree. Will any of this be officially resolved in “the Wild Storm?” Maybe. Does it really need to be? Nah, not really.

Diana was motivated by her father (and his death)
We get a very interesting flashback on Diana Prince and find that most of her motivation in life came from her dying father. He implored her to seek out their Greek gods, and man, she went for it!

Diana is indeed stronger than an average human
While not a demigod like the DC version of the character is, this version of Diana Prince is human. She, however, has become super strong due to using several experimental techniques that she acquired from Alexander Luthor.

Christine gets what she wants
For the only the second time, Michael actually gives Christine what she wants. The only other time Michael got her what she wanted was when she was able to get her hands on Oliver Queen’s company. Barry Allen destroyed all his research, and Michael destroyed everything related to Arthur Curry. So, yeah Christine gets Constantine with a head full of magick and technological know-how, the only thing she has to sacrifice is having Michael on the payroll.

Deaths
Ok, I’ll admit to being wrong in the past, and here I was. When this book was starting to come out some folks said “Hey, why are all the villains just twists on DCU characters? Why not have him fight updates on old WSU characters?” and my smart ass response was something like “All the DCU characters are disposable, WSU characters may have plans for future use, thus are not used or are only in minor roles.” For me, this extended to the thought that only old WildStorm characters would be left alive at the end of the series, all DC and new characters were on the potential chopping block. Imagine my extreme surprise when Diana took out Leon, Victoria, and Hector. I also didn’t expect Constantine to survive either. Let’s hear it for shocking developments in comics!

Alexander Luthor / Lex Luthor
We still have a very bald, very ruthlessly evil businessman version of Lex. Now, to be fair, I’m not as up on the big DC players as I should be. For real, I know a lot more about Zatanna and various Doom Patrol members than I do any of Superman’s supporting cast, but I still think that this version of Lex is pretty much like the one we usually see over in the mainstream DC. The only difference is that this is the result of a Luthor running free without a Superman to distract/stop him.

Bruce Wayne
This is the second reference to Bruce Wayne in this series! The first time was just a passing reference to a boy out East whose parents were shot in an alley being compared to Oliver Queen. This time it was in a conversation with Diana and Alexander and he was explicitly named. It seems this version of Bruce is a corporate genius on the level of Diana and Alexander, and he is a major business rival to Alexander and perhaps more.

We meet, for a very short time, Dr. Nelson who is “the Wild Storm” universe version of Dr. Kent Nelson, better known as Doctor Fate, over in the DCU. I kinda thought it was him, but once we were shown Diana crushing the Helmut of Nobu I was sure. Looking at my research it shows that while the current New52 rebooted Dr. Nelson is single, he was indeed married in the post-Crisis iteration of the DCU much like we see here. 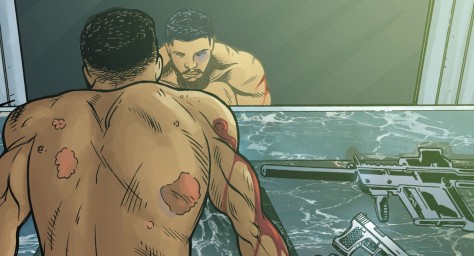 Starting off and ending the series with Michael looking in a mirror is a great call back. It is so organic to both moments that at first, I didn’t catch it. The ending is just so powerful that I was so wrapped up and satisfied emotionally with the story that I didn’t make the connection until I reread the entire series as a whole. Michael also looks in the mirror near the beginning of issue 6, having him spending time in the mirror at the midway point of the series as well. I am a nut for a structure like that. 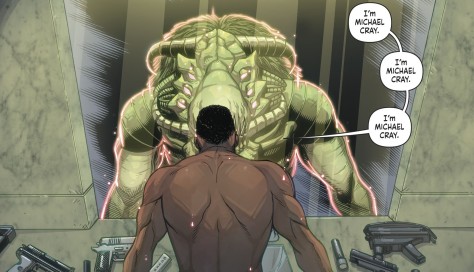 Final Thought
I enjoyed the heck out of this series. I wasn’t sure what to expect going into it. Hell, all I knew was from something that Jim Lee said at the “WildStorm 25th Anniversary” panel at SDCC in 2017. All Lee would tell of the “Michael Cray” book was that Ellis had told Hill that the book needs to be three things: Michael Cray must be killing someone, planning to kill someone, or narrowly avoid being killed by someone, in some combination in every issue. (This is from memory and I could have gotten something mixed up there.) I have to say, yeah, on that front this book delivered! But also Bryan Hill and N. Steven Harris created a character that I truly ended up caring about in very few issues. I get stuck on good characters written and presented well, and that’s what I kept coming back to this book for, and it kept meeting and topping my expectations. Sure, look, I’m a WildStorm fan, but I’m also hard to please. I don’t say something is a “good comic” very often, and I’ll say that “Michael Cray” is a great comic. I can admit, yes, I would’ve bought this book each month and reviewed/compare and contrasted it on this site no matter what. I hoped that it would be good, and I was absolutely delighted that it was better than that. I am sad that I will not be picking up issue 13 next month if I’m being honest. Come on, don’t tell me you wouldn’t want to see that! Michael on the run with an alien in his head and control powers, who is beholden to no higher authority and trying to remain the man he wants to be? I want to read that book, too!