I know, the main point of this blog is to talk about the continuity of WildStorm Universe as it was from ’92 – ’11… but I really like doing this compare and contrast thing! Admittedly, I have no idea where Ellis and Davis-Hunt are going with this new series, and honestly, I couldn’t be more on board with what they and their team are bringing. I just thought I’d have some fun, point out some of the references/differences from the old WSU to the latest issues of “the Wild Storm” that came out a few weeks ago. 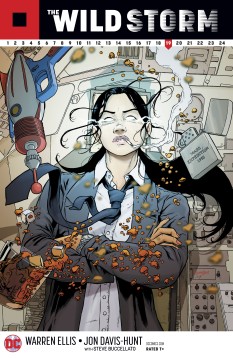 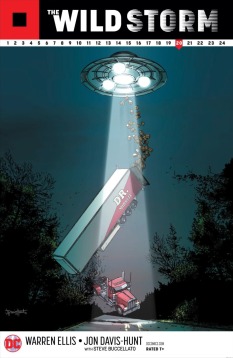 As we all assumed, the mystery duo was indeed Midnighter and Apollo, but yeah there are some twists on these old favorites. With Apollo, he’s still a sun-god type, he’s still in a relationship with Midnighter, and he’s still the more positive one of the two. The biggest change is his hair color. Gone are the platinum blond locks, but hey, he still has that solar halo!

The new Midnighter may or may not have the same power as the WSU version. Yeah, we see him say “I won this fight the second I looked at you” which is reminiscent of how Midnighter would quickly size up an opponent and fight them a million times in his state of the art computer brain to know exactly how to beat them.

We don’t know if this Midnighter has those computer upgrades, but I think it is safe to assume he does. In and out of the mask is also a big change for various reasons. Either way, he still feels like the Midnighter that Ellis used to write way back in The Authority and StormWatch.

After being name-checked in issue 4, Santini makes his way to The Wild Storm. Much like the former version he’s working for I.O. Also, he’s visibly injured. The old WSU version had a bum leg thanks to Emp, so it’ll be interesting if we find that this version of Santini gained his scars due to a run in (unknowingly or not) with Jacob. This new version of Santini seems to be a lot more of a bastard than the former one though.

Shaper Engine / Planet Shapers
In The Wild Storm, the Shaper Engine is what the Daemon uses to create beings, like Jenny Mei Sparks, that will help guide humanity past the Gaian Bottleneck but also keep the Khera in line. In the old WSU, we also had Shaper machines, they were Kheran and much different, more a terra-forming thing than a life creating machine that was left on Earth by the Kheran Shapers Guild. I only mention it because I don’t think the name “Shaper Engine” was used coincidentally.

One of the former doctors shows Shen what Earth would look like once the Khera are done with it. It looks a lot like what that alternate Earth looked like that the Four visited in “Planetary” where they got their powers.

All of Jenny’s History
We’re starting to get some glimpses into Jenny’s history, but there is still so much we don’t know. We have a good idea on what happened in 1952 (the Radar Men) and then she spent time with Orson Wells, Rita Hayworth, and Albert Hoffman before going to Mars in 1955. We know there’s so much more there and I can’t wait to read more of it!

Skywatch Abduction?
Apollo is watching a video with a man talking of an entire town being abducted. While Midnighter thinks this might be a bit brazen for Skywatch, he doesn’t rule out that Skywatch would kidnap an entire small town.

Mission on Mars in 1955
Skywatch’s mission was to start making Mars habitable. They did have to build underground facilities as to not freak out the common man though. It was step one of a multi-step plan that Bendix hasn’t been able to fully enact due to the treaties Skywatch has with I.O.

The True Mission of the Khera
The mission was to find a planet full of people, which is hard in this universe, and get them to be a slave species to help get the Khera to a better, more hospitable universe.

Jacob’s Goals
We know that Jacob was trying to lift humanity up, but now we know why, he eventually did not believe that humans should be slaves to the Khera. He wanted them to be more of a companion species to share the galaxy with! Now he’s using Khera tech to aid humanity and move them both, further along, to get past the Gaian Bottleneck. He either wants us all to go back into space and share our galaxy or just wants continue the great work on Earth to the better universe with him and the Khera.

Seemingly Unaffiliated Khera
The don’t agree with Jacob’s scrubbing of the mission to enslave Earth. Many of them seem to feel stranded on the Earth with nothing better to do. Without enough Khera working to get humanity enslaved to get to the next universe, they might as well make the best of a bad situation and get drunk at LA bars. These Khera has often dropped their disguise and are the inspiration of many religions.

The Daemon’s Goals
The goal of the Daemon is just to stop the Khera. The Daemon preceded the Khera to Earth and set up the shaper engine to create versions of humans to thwart a Khera take over. The Daemon does not want to see humanity used as slaves by the Khera and it also tries to influence humanity in other ways, as we can see with Pris.

The Daemon and the Khera
The Khera used to call the Daemon “the Other” which makes me think that the Daemon is the only other possible alien race that the Khera have tried to use in the way they were originally sent to Earth to use. The Daemon will do anything to help Earth and piss off the Khera, but it’s more out of bringing a universal balance. The Khera using other species is a big no-go for the Daemon.

Lucy and the word “Code”

Picture of Lucy, the word “code” and a mention of religions. This is the third time. I think this is leading to a “Coda” revelation. Or it’ll be called “Code A” or something in this new universe.

In the world of The Wild Storm, we once again find DCU lore used as entertainment. This time it is a movie named “Infinite Crisis” named after the big DCU crossover event from ’05-’06, a mention of Central City from that film, which in the DCU is where the Silver Age Flash lived, and finally Darkseid, the antagonist of the “Infinite Crisis” film named after one of the DCU’s greatest evildoers.

Earth Post Khera Occupation / Apokolips
You know how earlier I said that Earth Post-Khera would look like that alternate Earth in Planetary… well both are actually a reference to the planet Apokolips created by Jack Kirby. Thank you to the handful of readers that pointed this out!

The more we go on in this book, the more and more we are breaking out of the 9 panel/3rd page layouts and even seeing the white border/gutter color change or being dropped altogether.