I know, the main point of this blog is to talk about the continuity of WildStorm Universe as it was from ’92 – ’11… but I really like doing this compare and contrast thing! I just thought I’d have some fun, point out some of the references/differences from the old WSU to the last set of issues of “the Wild Storm” that came out last year. 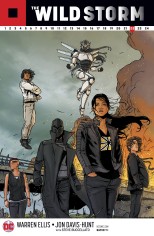 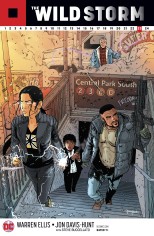 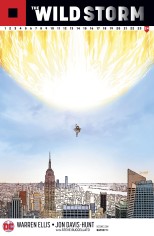 We finally have Jackie King and the word “Battalion” used together. After using the device that Angie called “Scary AF” to take out Santini she calls it the “Battalion Device” and that’s as close to that code name as she’ll get.

New & What we don’t Know
OK, sure there shouldn’t be too much that we don’t know to come at us in these final issues. But there is one thing to think on: Did the Daemon also have creatures like Jenny Mei Sparks in the Bleed to protect it from the Khera? I only say that because these two panels mirror each other.

The mission of the Khera is to get to a higher/better dimension where life isn’t so cold and brutal, why haven’t they used Bleed Space to get there? This might be the reason, but we’ll never know for sure. 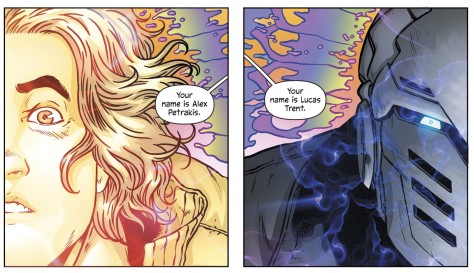 While they find out their names before their Skywatch code names, they both decide they like the code names better, which cracked me up.

It’s a small moment, but because of the kindness extended to Angie in issue 1, she makes sure that I.O. gets Terrance out of NYC safe and sound.

So Much Death
Santini, Slayton, Cray, Craven, Skywatch powered beings and various Skywatch & I.O. employees. Frankly, I’m surprised that Ivana gets away with only being arrested.

Skywatch & I.O. are both publically known
In both the ultimate revenge by Jenny and Angie, Skywatch can be seen and tracked, and files about I.O. have been uploaded to the internet. There is now no longer a secret power struggle on Earth between the two entities. With Jackie in charge of I.O. and Henry too paranoid now that he can be seen, who knows what will go on between the two, but for the most part, they are partially neutered.

DCU Connections
There’s mention of the Daily Planet again… every time it comes up and I don’t point that out again, someone does in the comments…

I sometimes forget how hilarious Ellis can be… and then we get this page. I miss him writing any version of Midnighter & Jenny.

And I can’t leave without saying how much I enjoyed Jon Davis-Hunts’ version of John Lynch. This panel in particular cracked me up simply because of the art.

Final Thoughts
I’m always going to hate that the WildCats characters got written out of the ending. This feels pretty clear to me, and why not, they were to set to get their own 6 issue series to hopefully put a bow on their part of the overall story… but that’s just not happening. I would’ve loved for this to officially launch some sort of new Wild Storm universe. One where we’d get a 6 issue miniseries at lease once a year or more, either written by Ellis or guided by him. I still liked how “Cray” turned out and was really looking forward to whatever the “Zealot” title would be like. Not getting “WildCats” just seems like such a bummer, and a waste because we didn’t see them in the climax of “The Wild Storm!” I mean, yeah, in my heart of hearts I want to see this new version of the Authority with Ellis and Davis-Hunt on it, I want to see a Gen13 book with Lynch & Steven Rainmaker hunting down the kids and maybe a few teenage Gen13 style hijinks. But not getting “WildCats” stings, because I really loved this new take on the universe and even without my wishlist books, it seems lacking without that final miniseries. Are there a handful of unanswered questions? Sure, but not seeing Cole, Kanesha, John, and Adri in the three issues was a shame.

But ultimately, I have to commend Warren and Jon on a memorable and fantastic series that I thoroughly loved from start to finish! Thank you, sirs! And also all the rest of the crew like Steve Buccellato, Brian Buccellato, Ivan Plascenia, John Kalisz, and Simon Bowland that brought this series to life!

Where to find these issues: