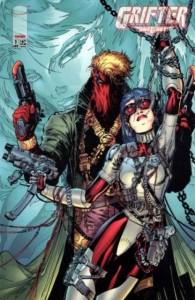 Woo hoo! A Grifter solo book! Officially! Not just “the Savage Dragon” Vol. 2 issue 13 this time! So yeah, that’s good! The not so good news is that it isn’t by Choi and Lee. Awwwwwww… But, it still is a pretty damn fun book regardless!

So Cole is tooling around DC and he sees a couple at a bar. He knows the loudmouth the next booth over is a spy named Polchow and he is with a date. He also knows that spies like he and Polchow have been winding up dead as of late. Cole’s even betting that Polchow ends up on the chopping block before he does, so Cole hatches a plan to find out how, why and hopefully prevent it! Well, turns out that Polchow’s date was the killer, and Cole fails in trying to save Polchow and even manages to get stabbed with a poisoned blade, which causes him to pass out, at the scene of a crime. This is why you can’t let dames get in the way!

Cole wakes up tied to a chair. Who is holding him captive? An old frenemy named Gallows. He was on the Russian side during the Cold War, that’s the major difference between the two. Other than the fact that Gallows is mostly robotics now. What they have in common, is that they were both trained to be spies by the same man, Hans Arp. Cole is putting it together that the chickie he fought was trained by Arp as well, and Gallows lets him know that Arp has a crew of spy/assassin gals, and he’s using them to take out the competition AKA former Arp trained spy/assassins. It’s kinda like Molotov Cocktease’s plan during the season three finale of “the Venture Brothers” complete with a gaggle of female ass-kickers.

After figuring they can trust each other Gallows and Cole are getting reacquainted, during which we get a flashback to the last time they were together, and what they had thought were the final days of their former trainer. Arp was a real James Bond type back in the ’60s, but after the loss of his wife and kids he couldn’t go on. The US government decided to keep him on as a trainer for future spies, but eventually, Arp went into business for himself and started training spies for any and every country with the cash to pay. All the secret agencies in the world got together and sent their best to take out Arp, which, of course, were all trained by him. This all happened in the mountains of Switzerland, with snow, heights, the works. Gallows got shot down early but managed to survive enough to have a cyborg body built for him later, and Cole was the official last man standing against Arp. Cole had his gun to Arp’s head, and before he could pull it Arp shot his own climbing rope and fell. Everyone just shrugged their shoulders and assumed “Homey’s dead.”

As you can guess, Arp didn’t die at all. Now he’s back and he only has Gallows and Cole to stop him. There’s a bit of business with Cole and Gallows going undercover to find out more information, and dealings with a mad scientist type, but in the end, all leads us to Arp’s home of operation. So, Cole and Gallows burst in and start taking on all these assassin ladies. They manage to take out all the women, save one named Andromeda, and in the process Gallows sacrifices himself to save Cole. The lone woman standing almost gets Cole because he’s distracted by Arp running away, like a little baby. Cole makes short work of her and takes off to the roof after Arp.

On the roof, Cole and Arp are shouting at each other as they fire back and forth. Each of them are going a bit wild with the bullets, but it’s easy to understand because as spies they’re both good shots, but better dodgers. Arp’s main downfall is that he misjudges a gap in the roof as he jumps for Cole and falls to his death. This time, for real. Homey’s dead. Cole is a bit upset about all he’s gained and lost over the last few days. And as he leaves the premises of Arp’s would be spy headquarters he notices that Andromeda’s body is nowhere to be found. He wonders if he’ll see her again, and if they’ll be friends or enemies then, because if there’s anything this caper has shown him, it’s that you never know who’s with or against you.