this entry covers issues 18 and 19 of “StormWatch” volume 1, as well as the backup stories “Loose Cannon” parts 2 and 3 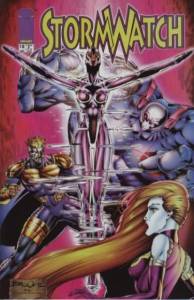 Right off the bat, we see the StormWatch side of Void rescuing Maul from SkyWatch. I mean, one would think that by looking at the cover. Then again, this is ’90s Image, so maybe I should stress that the cover takes place in the actual comic. This drives the members of StormWatch crazy. The monster that lead to their beloved leader’s (supposed) death has been kidnapped. Fuji is the first one that comes across the data that will lead StormWatch towards the WildC.A.T.s. Oddly, while presenting the information to the rest of the StormWatch teams, SunBurst knows they’re called “the WildC.A.T.s” before Diva tells him. This freaks him out, because he’s not sure how he knows this. Oh, and speaking of going crazy, Maul getting sprung from SkyWatch, drive Malcolm to get mad and go visit his crazy ass pops in the prison/freezer.

You may ask why Diva was giving the team debriefing, and the answer to that question is Christine/Synergy/WeatherMan-One has gone missing. Turns out Argos has kidnapped her yet again and plans to use her to open a dimensional portal again. Once again, he fails. This time Christine gets the best of him on her own and kicks his now very preppy ass. Hey, alternate dimension villains, get with the program like Argos, dude was looking pretty damn sharp! Alright, to be fair, he goes back to his lame robes when he’s getting his ass kicked, but when he’s doing his evil monologuing, he’s got a nice tie and suspenders game going.

On top of all this Winter has found out that M.A.D. 1 is back on the loose! He decides it is time for him to take a leave of absence because he means to take down M.A.D. 1 once and for all. To do this, he goes to the one man who’ll have the info he needs, that man is Henry Bendix. Bendix is well aware of why Winter came to him, not only that, but he suggests that they contact Cannon to join them on this personal mission.

Where’s Cannon? Well, since he quit the team he’s just been kicking bad guy ass. He longs to see the world in black and white. Bad folks need a beating, good folks need protecting. So, while taking down a research facility on one of Gamorra’s islands, he comes to a real crossroads. Sure, it was easy to take out the guards at this place, also to take out the gross as hell Gammorian scientist doing experiments on live people. But when one of the experimented on girls begs Cannon to put her out of her misery, he can’t. He just can’t. He’s not about to pull a gun on someone who isn’t a “bad guy” even if they are begging for it. He just walks away, and I get the feeling whether he pulled the trigger on that girl or not, he was going to walk away with the same sense of guilt. For Cannon, there was not “right thing to do” in this situation. The boy needs direction, lucky for him, Winter and Bendix will be there soon.

this entry covers the main stories in “StormWatch” Vol. 1 issue 15 through 17, including the backup story “Loose Cannon : Part 1″ in issue 17

Alright, here’s how it all comes down, Battalion’s death, step one in StormWatch and the WildC.A.T.s turned against each other and Defile getting pretty proud of himself. Seriously, I wish there was a lot more to say about these three issues, but that’s basically it. Either that or I’m off my game after missing last week’s entry due to severe drunkenness (I’m of Irish, Scottish and German descent, we’re also Roman Catholic, and it was a family wedding, held in Denver, Colorado, with the reception at a brewery, you try to tell me how I was supposed to escape that weekend sober!)

Ok, we have Defile siccing a huge purple monster, with a time bomb strapped to him on Hawai’i. The intent is to reactivate the Mauna Loa volcano, which not only will wipe out the Big Island but will also mess up the other Hawai’ian islands, as well as the honeymoon plans of several young couples. This cannot stand! And because it is a big purple monster, the only team to call is StormWatch.

What I like about the away team here, is it is pretty much “StormWatch Classic” plus a few. We have Battalion, Diva, Fuji, Winter and Hellstrike all together on a mission again, the first since issue 6 I believe. We also have Fahrenheit, Cannon and Strafe along for the ride. So yeah, they’re fighting this big purple monster, with horns on his back… wait, these character traits seem awfully familiar… Battalion eventually rips the bomb off the monster, and the monster passes out. He then protects himself in one of his psychically projected bubbles, says the bad ass line of “Tell Malcolm I love him” and the bomb explodes in the bubble only killing him and sparing the volcano.

Oh yeah, and Timespan shows up to watch this apparent suicide. He also ends up pissing off Diva, because he’s only really there to stall her and prevent her from doing anything to alter Battalion from blowing himself the damn up. Timespan then teleports back to shortly after the 3rd Crusade and the Traveler shows up and they fight. He manages to escape in time again. It says he’s in “New York City, four months ago” but I’m not sure if that’s a reference to his first appearance or just to another time that he hung out to heal before he first confronted Battalion.

During the fall out of Battalion’s death, we see the team in disarray. Strafe is acting out until his mama sets him straight. Cannon is getting to be a big baby again because his girlfriend got the job he wanted, which leads him to quit StormWatch altogether. And Diva and Christine are having a hard time dealing with it all together. Eventually, there’s a funeral and even Henry Bendix shows up. But the big reveal is after the funeral when we see Argos show up to the grave and act all super villain like.

Where to find this story:

this entry cover both stories, “Never Give Up” and “the Music Lesson” from “StormWatch” Vol. 1 Special issue 1. 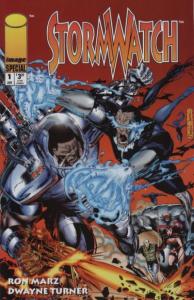 This issue opens w/ the Jackson King in the “we’re-not-calling-it-a-Danger-Room” battling automated opponents AKA auto-ops that look very familiar. Ok, it’s the WildC.A.T.s. He soon gets interrupted by Weather Man-One for a mission. Turns out StormWatch crew members keep going missing on the moon, and Weather Man needs StormWatch One to get their asses over there to find out what’s up. Jackson doesn’t seem interested until he’s told that Christine is one of the missing StormWatch personnel.

The usual team is formed, Jackson, Diva, Hellstrike, Winter and Fuji, despite Jackson wanting to tackle this one alone. As soon as the team gets there they find a dead StormWatch jobber and an odd archway. Hellstrike teases Jackson for being in lurve with Christine and is told to stuff it while the team walks through the archway to be transported to… another planet? another universe? it isn’t clear other than it is someplace else, and totally not the moon!

What they instantly find is two super powered beings named Ajah and Argos fighting. Ajah requests the aide of the new arrivals and StormWatch goes after Argos and his minions. It doesn’t take long before Argos turns tail and runs. Turns out, Argos came for Ajah to make her his latest concubine, and too bad for him, she’s a single independent woman who don’t need no man. Or at least not a crazy one like Argos, because she takes a real shine to Jackson. So much of a shine that after a royal dinner, because she’s part of the royal family, duh, that she comes on pretty strong to Mr. King. I’m not sure, but I think it’s implied that they totally do it.

Next day, it is time take the battle to Argos, because, as rumor would have it, he had another back-up concubine plan if it didn’t work out with Ajah. Put two and two together and it’s obviously Christine. StormWatch fights strong, gets to Christine, frees her and then aren’t sure what to do. At this point Christine lets them know that Argos built his own portal archway. Oh, dammit, I forgot to tell you that that klutz Fuji busted the original portal archway, just like Jackson forgot his kinda sorta girlfriend chained up in an alien prison while he hooked up with a space princess.

Once they get to the portal archway Jackson informs the team he isn’t going with them. Turns out, he’s totally all about Ajah now, despite really not seeming to “like like” her prior. Here’s where Argos gets the jump on the team and attacks Ajah. He also calls her “my sister!” as he shoves his hand through her torso. Uh… he wanted his sister as his concubine? Well, they are royalty, inbreeding and all that I guess. At any rate, Argos runs through the archway and transports to the moon, StormWatch follows, Argos tricks Jackson into blowing up the archway on the moon and disappears, an unhappy StormWatch heads back to SkyWatch.

In the back-ups story we find out the secret origin of Diva, during a date to the opera with Cannon. It’s a tragic tale where during her first singing lesson, her seedling power kicks in, and it breaks all the glass in the joint, including her singing instructors glasses, blinding him. This memory is brought up due to Diva and Cannon running into this now elderly blind man at said opera. It is indeed upsetting and Diva runs off. Cannon follows after her, and in one of the few instances for the character, acts like a decent human being, comforting his distraught girlfriend. In the end does a bit more to humanize Cannon than it does Diva, but it helps us know where she came from.