This entry covers “Cybernary” volume one issues 2 through 5 by Steve Gerber, Jeff Rebner and Richard Friend as well as the short story “Cybernary : the Price” by Jeff Mariotte, Jeff Rebner and John Tighe which originally appeared in “Overstreet’s Fan issue 6.” Due to what Cybernary is wearing, and where we are at in the story “Cybernary : the Price” should be read before moving on to issues 2 through 5. 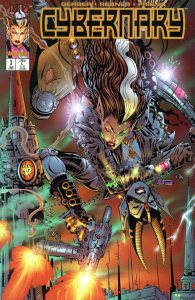 For the purposes of clarity, I’ll be referring the star of this book as Cybernary, and no longer Katrina or Yumiko. I’ll also be using the pronouns “her/she” instead of “they/them” like I did in the coverage of the previous Cybernary stories. At this point in the book, Cybernary is starting to act as more of a conduit between the two personalities instead of switching back and forth between them, so it feels more apt. Not that the independent sides of Cybernary still don’t crop up, and it seems in the stories she’s mostly called Katrina, but in reading, it seems more unified. I mean we’re opening on the story of a want for Katrina, that is, to find Cisco. There is seemingly no difference in this desire where Yumiko is against that idea, and Cybernary seems more like a whole being.

In the search for Cisco Miranda leads Cybernary to where they might be able to find some information. This is unfortunately in the Gamorran slums. Sketchy areas that have high technology by low income. Cybernary is left to wait as Miranda goes to gather information. Cybernary then stops a poor woman from selling her baby for cash to some tech experimenters. Due to the large fight that ensued, at the next stop, Miranda brings Cybernary in to meet with her friend Hiroshi to try and avoid the craziness. Too bad, a big fight breaks out here too, while Cybernary wasn’t initially involved she does some damage to many of the involved parties.

After Hiroshi tells the ladies they better run to avoid the Kaizens police squad, they end up at the home of Trantor “the Jumper” MacGregor. Trantor is a techie of some stripe and is in need of some specialty electronics to upgrade his work. He knows a man by the name of Lance Wernick that has some, and if they can get these chipsets, Trantor is happy to give them what little information he has on the whereabouts of Cisco. Yeah, Cybernary and Miranda are being sent on a fetch quest. 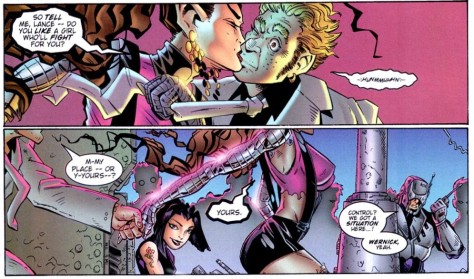 Miranda and Cybernary track Wernick to some crazy kind of fetish club and use Wernick’s base instincts against him. Yeah, Wernick, stop thinking with your pants! Cybernary takes him back to his hotel and as Cybernary is casing the joint for chipsets that Trantor wants, Kaizen’s police blast a hole in the wall and are ready to arrest both Wernick and Cybernary. While they manage to get away all they’re really accomplishing is raising Kaizen’s interest into what is going on. He sets Minotaur and his best men to investigate.

You see, Kaizen has had some a particular interest in this crazy Nympho-Droid running around since he’s started talking to Dr. Vandalia. That’s right, Dr. Vandalia managed to survive his fight with Cybernary and even though he’s just a head in a jar, he persists. He spills the beans on Yumiko being a part of the Cybernary, so Kaizen means to get his little girl back. Dr. Vandalia would like to go get her himself, but Kaizen doesn’t yet trust him, that’s why Minotaur and crew are on the job. 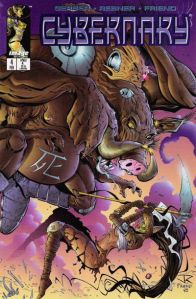 After Cybernary gives Trantor Wernick’s chips, Trantor turns over the information he has on Cisco. Turns out he’s part of a cyborg pig man… yeah… oh, and he’s being held on Minotaur’s crazy ass island. Before the crew can head out, Minotaur’s best gal Borgia attacks the team. She literally flies down on her Scooty Puff Jr. and starts messing Cybernary’s friends up. Cybernary isn’t having it and knocks Borgia’s jaw loose and steals her hoover scooter to go save Cisco.

Cybernary puts up a good fight, but she’s soon bested by Minotaur’s lesser goons. To be fair, there were a lot of them, firing from all directions, poor thing was just overwhelmed. She wakes up in the Minotaur’s labyrinth which leads her to find Cisco-cyborg-pig-man in an arena vs. her! When she eventually defeats this abombination of an ex-boyfriend she sets her eyes on Minotaur. Minotaur isn’t dumb, so he traps Cybernary and orders Gila to kill her. Before Gila can get a shot off Borgia shows up and tells them that Cybernary is the Nympho-Droid that Kaizen sent them after in the first place, and it’d be a stupid call to kill her at this moment.

Kaizen has spies everywhere and doesn’t like what he sees on all his little spy cams. To get Cybernary back he puts Dr. Vandalia’s head on a new body that looks like a god damn Millenium Falcon and sets him to the task of retrieving Cybernary. Vandalia fails, and Cybernary rips him to shreds this time. Maybe he’ll really be dead this time! Cybernary makes it out onto the beach of the island and is greeted by several of her friends, and bunny with a huge brain named Bunny. They all watch Minotaur Island burn as they sail away.

Alright, Cybernary is one of those books that reveals itself over the course of reading it. I’m going to present the story pretty much chronologically, not the order the story is told in. Why? Because I’m as boring as dry toast. Also, I’m imploring you to read these books as presented as Nick Manabat’s art on the first 4 short installments is fantastic and you should really get a look at them. My words will never do justice to that art, so I’m not even going to compete, hence my uninspired coverage!

“Cybernary” is all about how a girl named Kat, in a land of extreme have and have-nots, and how she tried to lead a revolution to save the less fortunate. Katrina, along with her “boyfriend” Cisco intercepts a dairy truck that is carrying weaponry. The idea is for that weaponry to be used to arm her and her fellow revolutionary types. Nothing, of course, can go this easy on Gamorra, and it isn’t long before Katrina and her rebel group are attacked by Gamorran madman Gila and an army of Hunter-Killers to get the weapons that were stolen from them.

While all their partners in crime were getting mowed down, Cisco and Kat are very close to getting free. While Kat makes it out, Cisco is snagged at the last second. Kat manages to track Cisco to the labs of one Dr. Vandalia in a Gamorra Industries building. Like most evil scientists in Gamorra, he’s totally given himself some kind of crazy-ass techno body. He’s doing his evil mad professor thing of replacing Cisco’s body with mechanical parts when Kat tries to stop him. For reasons known only to him, Vandalia takes a shine to Kat and offers her Cisco’s life for hers. He even goes so far as to offer return Cisco to his organic state before letting him go. Kat sheds a tear and takes him up on the horrible deal.

What Dr. Vandalia has in mind is to turn her into a gift for Kaizen Gamorra. He’s reshaped her ears, as well as some other questionable “upgrades” to make her more resemble a high-end Gammoran Nympho-Droid. While working on this “gift” Vandalia has fallen behind on the latest upgrades to the ever-present Hunter-Killers. A man by the name of Mr. Chang goes to confront Vandalia on his slacking off, and takes Yumiko, the bosses daughter, as a power play move. It doesn’t quite go the way Chang would like and he leaves in a huff, Yumiko, however, stays behind.

Yumiko is trying to smooth things over with Dr. Vandalia as best she can, but she makes a simple, costly mistake. She reminds Vandalia and Kaizen Gamorra can have any woman he wants, so what would make even the greatest Nympho-Droid useful to him? Valdalia, always the messed up dick, decides to incapacitate Yumiko, hook her up to a bunch of machinery, remove her consciousness from her body, download it into a computer chip, and then install that computer chip in Kat’s brain. So yeah, now this crazily advanced cyborg now has two distinct personalities in a single body, and one is Kaizen Gamorra’s only child. Oh, and they both HATE Dr. Vandalia now.

Suddenly, a door in Vandalia’s lab is blown clean open as a charred body flies through it. Sensing an opportunity, Kat/Yumiko kick the stuffing out of Dr. Vandalia and make their escape. They find their savior is one Mr. Michael Cray. While they didn’t know him at first, the Yumiko side searched her data banks and noticed that he was a sworn enemy of the Gamorra Clan, and thusly our 2-in-1 heroine, slunk back into the shadows to avoid him.

Once free of the Gamorra Industry building they were trapped in, our gals are suddenly being pursued by a bunch of HKs. The ladies make short work of the green guys, and their little dogs too. But after mistiming a single grenade explosion, the body that the women inhabit crashes to the ground a goes limp. She’s picked up by the underground inhabitants known as the Techno-Dwarves who mean to scavenger the body for spare parts. While investigating their new prize they start to learn it’s history and that it is no ordinary Nympho-Droid. Because of this, one of the Techno-Dwarves accidentally fries his mind trying to interface with it. After this, the Techno-Dwarves send in a small cyborg named Miranda to talk to the Nympho-Droid and get information the old-fashioned way. Come on boys, don’t be scared to talk to pretty girls.

Meanwhile, all manner of creature are out looking for Kat/Yumiko. Minotaur is on the hunt at the behest of Kaizen. Mr. Chang is on the case because he knows that something crazy is up with all the destruction of Gamorra Industries property brought on by both Cray and Kat/Yumiko, and he means to find the party still on the island. For all his troubles Chang finds a scavenger named Guggen who lets him know that there’s no body here for him to retrieve, even if he wanted to get mixed up in all this mess. At this point, Chang gives up, but Minotaur and his crew won’t be stopped and will continue to pursue our girls for as long as it takes to capture them.