At long last, we get back to the flagship title of this WildStorm Universe! Man, I love these characters. I’m not just talking about the main team that’s stranded on Khera, I’m also talking about the makeshift team back on Earth. Bless Alan Moore, or whoever at WildStorm gave him the idea to assemble that team. Ladytron and Tao are the only characters that were created for the new series, so somebody is a genius for the (obvious) team-up of Savant and Majestic but also pulling in Cole’s little brother, Max. I could literally read another 20 issues of the teams being separate and their adventures on Earth and in space. I’ve always been happy with what we got, but this run looms large in my head, and I’ve always wanted more.

To the matter at hand. I’m going to split this recap up, I’ll do the Earth team’s issues first, then the Khera team’s issues. It just keeps this easier to recap, still best to read them as they are presented.

On Earth, the team is breaking into the home of H.A.R.M. of the Troika. Seems as if Slag and Attica are out of town so the new WildC.A.T.s team decides to take on one of the old team’s enemies. I believe the team is meaning to apprehend H.A.R.M. and then put him into stasis like they did with Ladytron when they first got her. I guess by that I mean that is the rest of the team’s idea, I’m pretty sure that Tao meant for the big lug to end up dead the whole time. If H.A.R.M. didn’t die then there’s no raid on his funeral later, leading to no apprehending of Slag and Attica, thus no distraction during their break out for Tao to make his escape when his plan falls apart later on. The best part of the “Capture/Kill H.A.R.M. Plan” is when Majestic drops Ladytron through the roof of H.A.R.M.s place as an ambush. She wasn’t sure she was going to survive the drop, and she’d only just found out dropping her was the plan during her fall. In true Maxine Manchester fashion, she hilariously stuck the landing.

Because we’re in the future we all know what an evil git that Tao is, so it is kind of fun seeing him take advantage of Maxine’s bloodlust knowing that if she landed on H.A.R.M.s head she’d try to rip off his noggin, exposing his brain. Then knowing Majestic would take enough action to scare H.A.R.M. towards the back entrance where Max and Savant had already snuck in. Either move H.A.R.M. made, be it threatening Max or Savant once he found them, would always result in Tao taunting Max about his brother’s shooting abilities and mentioning H.A.R.M.s exposed brain. Kind of brilliant in a sadistic way. That’s our Tao!

On the topic of sadistic, the team decides that they might as well crash H.A.R.M.’s funeral and see what other baddies they can nab. This is all going down at the Church of Gort, a religion created by and for cyborgs. The team does damage to the floor as they bust up through the catacombs and they manage to take down Attica pretty swiftly. Slag proves more complicated until that uncouth bastard Tao decides to subdue Slag with some liquid metal. Why is this so extra heinous? Because the super-hot liquid metal was the melted down remains of H.A.R.M. that were going to be used to cast his grave. Ew. For good measure, the team also take in Deathtrap as a bonus, even though he was just there paying his respects to a fallen comrade. 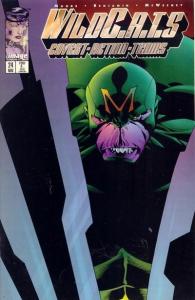 Ok, let’s get to space where… well… things aren’t looking so keen on Khera and Void is the only one that seems to notice or care. In her looking for where the heck Pris is she checks in with each member of her old team. Jeremy is looking to go see the sights of Khera. Reno is learning more about his powers from a Kherubim Lord at the Shaper’s Guild. Zannah is back with her Coda where she is being treated like the high queen she is. Zannah is becoming kind of a jerk, she’s not alone, Emp is too but we won’t see that just yet. The power of local politics amplifing the worst of people and all that. When Void meets up with Spartan she sees him playing with other Spartan guards. He fills her in on the Kherubim Senate seat that Zannah and Emp are each after and compares Emp’s side to Republicans and Zannah’s to the Ku Klux Klan.

It takes some time for Void to find Pris, but once she does she’s in for a surprise. Turns out that Pris wasn’t out all night dancing in a nightclub like literally, everyone thought. Seriously, how shallow are they all and how shallow do they all think Pris is? Pris reveals that she’s been staying in a Daemonite ghetto since they landed on Khera. Why there? Because she has Daemonite blood. Why is there a Daemonite ghetto? Oh, for all the refugees of the Kherubim/Daemonite war. Refugees? Why yes, see, the war, well that’s been done 300 some years. Uh…. what? 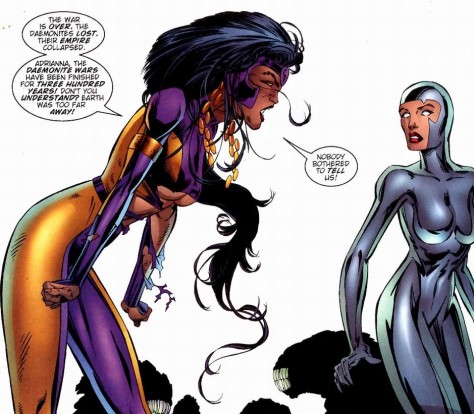 Jeremy’s sightseeing takes him to an area underground called “Down-Town” where everyone looks like him. We’ve always seen other Kherubims and they’ve looked human, only Jeremy ever turned another color, now we know why. Technically, he’s Titanothrope, not Kherubim. Well. Kind of. Turns out that the Titanothropes are native to Khera, the Kherubim just took over their planet and made second-class citizens of the native population. Jeremy is finding all this out from a young woman he meets name Glingo, who he starts to develop a crush on. It isn’t long before Jeremy finds himself challenged by a local boy named Baxa. Baxa is Glingo’s brother and he doesn’t like Jeremy hitting on his lil sis. Of course, the challenge is a fight, and Jeremy uses his brains and beats Baxa, what does he win? Surprise, it’s Glingo! Oh Jeremy, what a pickle you’ve found yourself in now. Just looking for a little fun in what seems like paradise and you end up with an alien fiance. Jeremey’s excited confusion is replaced by frustrated confusion as soon as he gets back to his hotel room and finds Void, Pris and Reno looking pretty damn dour. Yikes! Odd day out for all the non-elite WildC.A.T. team members.