This entry covers “StormWatch” volume one issue 34 by H.K. Proger, Renato Arlem, and Joe Pimentel. Best reading order is to read the first 18 pages of this issue, then read “Backlash” issues 17 & 18 and then coming back to finish off this issue. Then again, that’s pretty wonky and it works just as well to read this then the “Backlash” issues. 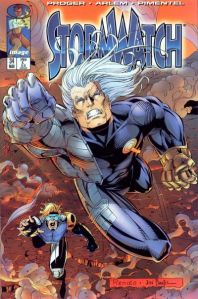 This book is basically several short stories, chopped up only giving us a few pages of each, before flipping to the next. They all converge on the last page with StormWatch heading back up to the newly completed SkyWatch 2. This issue is also getting a few more things in place for “Fire from Heaven” besides the team being back home. I’ll basically be breaking down these stories individually instead of flipping back and forth between them.

We open with Christine and Fahrenheit training. Then showering together. There’s some girl talk followed by a lot of work talk, but it is all pretty normal stuff that you’d expect. Just a nice way to open the issue, I guess.

When checking in with Jackson we find him hanging out with his mother. She forgives him for killing Despot, as that was no longer the man she married. Jackson also finds out that his mother didn’t authorize the release of his brother Malcolm as he was previously told. On top of all this Jackson has been going through the late Diane LaSalle’s StormWatch diary/reports and had found that she suspected Slayton of sharing secrets with I/O. When Jackson questions Bendix about it, Bendix basically says “yeah, I knew, so what?” which only serves to further piss off Jackson. Now Jackson is super angry and wants to hunt down Slayton, I mean he’s an enemy of the U.S. Government, so why not?

Fuji is worried about how Cannon is doing. He’s taking the death of Diva pretty hard. It’s not like he didn’t have Uzi from Team Aleph throwing herself at him in Tel Aviv, but he’s not ready to move on, no matter how forward other women are. Cannon is sharpening his skills by fighting combat droids that look like himself. This is a red flag, and Fuji sees it as such, but Cannon isn’t ready to talk about it. Instead, they meet up and head to find Jackson to go beat on Slayton.

While Flashpoint is busy getting chewed out by Bendix for killing too much, Winter comes back the U.N. StormWatch base with Scythe. In “StormWatch” volume one issue 33’s epilogue there was the murder of a StormWatch council member. Bendix tells Flashpoint to take care of it, as he’ll have to go to Russia to find out this info. Bendix informs him that Winter is Suspect Number One! Uh-oh!

Off to Russia Flashpoint heads, and who does he run into? Right where it looks the most incriminating? Yup, it’s Winter. Turns out there’s no way Winter killed that council member because that was the guy that was supplying Winter with all the info about what’s going on in Russia. The info that leads him, Cannon and Bendix into that fight against M.A.D. 1. Flashpoint isn’t sure about this until they’re attacked by “the Death Patrol” because really, what this run of “StormWatch” from issue 28 through 34 does best is introducing us to scads and scads of new and disposable characters. Flashpoint and Winter barely escape with their lives.

Nautika and Sunburst are having a tough time. Neither wants to leave the team, but both have kinda been ruined by it. Sunburst can’t walk, and Nautika feels guilty about their part causing his disability. At the same time, they’re both watching over the body of Undertow in his incubation tube. They both agree to stay with StormWatch, even though Sunburst feels like a burden.

Bendix finally gathers the whole team at the U.N. building and they all take a mini-spaceship up to SkyWatch 2. I mean, why didn’t they beam up? They just used their beaming tech in the last story arc, so… never mind, it’s a cool page, I’ll let it stand.

NEXT (if you didn’t dip out to read it yet): “Backlash” issues 17 – 18 by Sean Ruffner, Brett Booth, Mel Rubi, John Tighe, Mark Irwin and Mark Pennington.