this entry covers issues 5 and 6 of “Union” volume two

Union, this dude can’t catch a break. He gets home from his big adventure, helping to save the world with his part-time job at StormWatch, and he gets into a fight with his kinda-sorta-girlfriend. He’s also still paying for his drunken escapades in Chicago with the Savage Dragon. Not that I blame Jill at all, Union is just up and leaving without any kind of explanations. He’s playing an “asking forgiveness is easier than asking permission” kind of game, and fellas, that never ends well. But, by the end of the argument, he lets Jill know that she quit her crummy waitressing job, which does make her feel a little bit better.

When Union goes to think over the happenings of “WildStorm Rising” and about finding his place with StormWatch as well as with Jill, he’s interrupted. No mind that he’s sitting atop the Statue of Liberty, when someone wants to find you, they’ll find you. The “they” in this case is the witch Rhiannon. She pretty much just straight out casts a spell that sends Union into a parallel universe.

Luckily, Union is dropped off in this new universe pretty much where he was in his universe. Also, this universe’s Rhiannon was there to greet him. I call this the Sideways Universe after the title of issue 5 because, why the hell not, you know. It’s better than nothing. So, Sideways Rhiannon catches Union (and the reader) up to speed on an evil bastard named Lord Necros who has pretty much taken over either much of the world or just New York and the rest of the world lives in fear of him. He’s done this through magic, which is a bit more powerful here in the Sideways Universe.

Sideways Rhiannon leads Union to her team’s hideout. Only it looks to Union as if they’re getting hit by a subway car! Not so, it’s just Sideways Alex Fairchild using his telepathy to make you think a subway car is hurtling at you! Oh, those crazy Team 7 guys! Sideways Rhiannon gives some more background on Necros’ rise to power, and we see a bit more of Necros getting mad and wanting to crush Sideways Rhiannon’s new champion, but not much happens until the end issue 5 when Sideways Caitlin Fairchild shows up! And by “not much happens” I mean that the hidden rebel base is found by some of Necros’ minions and Sideways Caitlin Fairchild shows up, took them down and being all sassy. 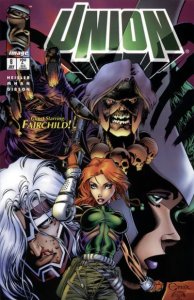 A few days prep and now it is time for the main event. It’s time to take the fight right to Necros himself. Union, Sideways Rhiannon and the Sideways Fairchilds lead the cause. But when it comes to the big battle vs. Necros, Union starts to lose his nerve. Come on Union, don’t be a big baby! Suddenly Union is down there, mixing it up with Necros, but he isn’t doing too well. In fact, it looks like Union got killed by Necros in a huge purple blast! What? Is this the end of our hero? Wait, no, of course not, it was just Sideways Alex Fairchild and his wacky powers of perception!

Sideways Alex Fairchild’s death turns out not to be in vain. It gave Union the balls to jump into the fight. And bonus, because of everyone, even Necros, thought that Union was already in the fight, Necros used a ton of power when he shot the snot out of Sideways Alex Fairchild, leaving him fairly weakened. Before Necros can draw more power Union starts to share the energy from his justice stone/staff with Necros. It is more than Necros can take and he croaks, too.

Ultimately, Union has saved the day. Sideways Rhiannon helps Union heal fast so that she can get him home. Before he goes away, Sideways Caitlin Fairchild tells him to leave normal Caitlin Fairchild alone, cuz he’s nothin’ but trouble! When Union is back to his normal reality he’s told by the regular Rhiannon that she’s left him a gift back at his home. The gift turns out to be Jill Monroe with a magically changed mind about how mad Union had made her. Messing with somebody’s mind like that? Not cool Rhiannon, not cool at all!