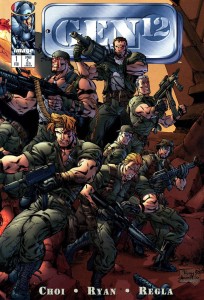 It’s Miles Craven’s funeral and everyone is celebrating the life of a well-loved public servant. Come on, the American people don’t know any better and don’t know what a right bastard he was! One man is tasked with getting to the bottom of what was really going on with Craven and I/O and that’s Commander Thomas Morgan and he’s working for Senator Kilroy and his group of cronies that want to fill the intelligence power vacuum that Craven left behind. They’re called the Intelligence Oversight Committee, and they mean business! So where to go first, why not I/O’s Black Razor director, Ben Santini.

Meeting Santini is no easy task, well I mean meeting him is easy, but he immediately has Morgan suit up with the Black Razors and go take on a crazy militia group. They do the job, Morgan performing perfectly, pretty much for Santini to tell him “You got the goods kid, hell you coulda been Team 7 material. By the by, I purposly kept myself outta all that mess, go find Alicia Turner.” With that, Morgan is on his way to the next part of his fetch quest.

Alicia Turner also doesn’t tell Morgan much. In fact, all she does is show off some fancy remote viewing technology and reveal that the Iraquis are “at it again.” I know kinda thin stuff that builds to nothing later in the WSU. Morgan asks her about the Gen-Actives and the picture of Cole she has behind her desk. All she does is kick him the name Joseph Brockmeyer and tells him to scram. 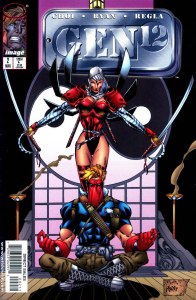 Morgan sets up a meeting with Brockmeyer to meet in Chicago and get whatever information on Cole there is to have. Morgan was a bit puzzled as to why Brockmeyer is so much older than Cole but lets it go the hear some intel. We hear a bit about Cole’s home life and him leaving it behind and trying to join a life of crime. Even though he was a driver for some small-time thieves, he drew the line at taking hostages and killing. This put him in the good graces of the FBI agent that was busting Cole’s new friends. This man was Brockmeyer, and he got Cole into the military where he impressed everyone enough to get into Team 7.

We then have Brockmeyer filling in a lot of life/story details about Cole. Like leaving and returning to Team 7 over the years, finding out his mother had passed and becoming a soldier of fortune. We even get a glimpse of what I suppose is the first time he meets Zannah. We then see Cole and his involvement from the first issue of “Gen13” vol. one, and the aftermath when he’s tracked down by Colby. Colby says some ominous words and then leaves, giving an opportunity for the rest of the patrons at the Hot Spot that night to reveal they are Daemonites. Soon into the fight, when all hope is lost, Zannah shows up and saves Cole. After that, Brockmeyer lets us know, Cole was never seen again. Morgan takes this information in stride and bids Brockmeyer ado. We then find out that Brockmeyer was Cole in disguise all along, and wondering how much of what he told Morgan was even true in the first place. (But, uh, it seems like much of it is true…)