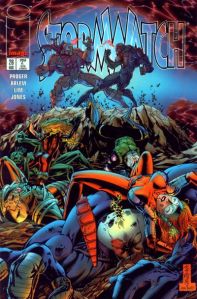 Alright, time to find out who the mystery man that shot Despot in the back was! Woo hoo! Aw yeah! And… uh… what? Huh? So turns out that blast didn’t happen? What? We get a full page rerun of Despot yelling at Timespan, word for word, and then… no blast? We even get the same “You may’ve beating Battalion, but you don’t stand a chance against me old man” line but no blast from behind before it is delivered? HUH? REALLY! All the text is line for line replicated but none of the action is!? That’s B.S. man! Ok, now that I’ve said my peace it is time to move on.

Looks like the mystery shooter is Battalion! I mean NOT the mystery shooter because he DIDN’T SHOOT THIS TIME! Ugh! For realz! Yes, I’m still on this! AGH! So, so, so frustrating! Ok, deep breaths… yeah, it’s Jackson King, back from the dead to kick his dad’s ass again. He took what he learned in his past when he was brought to issue 25 and trained in exactly in how to beat Despot. We also learned that Jackson faked his own death so that he could devote all of his time to his new mental training. I’ll admit, it was nice to see Jackson back, but man, I wish it could’ve waited a bit more. Warning, fanboying out time: I wish it was Malcolm finally overcoming his father and being the one to put him down. In issue 25 we saw him break away from Despot for a few minutes when he saw Jackson. I would’ve had Malcolm take down Despot (much the way we see in the comics already) but he’s channeling some unknown source of power. At the end of issue 27 or even later we find out that it is Jackson supplying that power to Malcolm somehow. Special King brother power or something. Jackson knew that he can affect Malcolm to break Despot’s hold, so we have them team up to take him down, only we keep Jackson’s involvement a secret for a few issues because it is way anti-climactic the way it actually ran. Oh, I wonder who the badass that just took out Despot after Jackson left. Oh, it’s Jackson… sigh… OK.

The fight goes on, it’s Despot vs. the New Battalion (he actually calls himself that), and he’s pulling out all the old tricks, getting in his head, using StormWatch and the WarGuard as puppets to bash Jackson up. Standard Despot stuff. Jackson eventually uses his new increased powers in conjunction with the downed SkyWatch circuitry to wrest Despot’s control over everyone near by. Jackson then starts to do a real number on his dear old Pops, right before Henry Bendix teleports in to pop Despot in the back of the head with a standard gun.

A standard gun you say? That’s not going to work on Despot! You fool! But it buys StormWatch enough time to teleport all of their personnel out of there and back to the U.N. building. Not that this is going to stop Despot for long, he gets to NYC from Death Valley, CA pretty quickly for an old guy that just almost got his head blowed up. It’s then that it is decided that Jackson and Spartan, the two StormWatch members that Despot cannot control, are going to fight him to the death. And to the death it is, for Spartan and for Despot. So yeah, that’s it for those two!

Before we leave, Timespan just has to dick around with Jackson again. Jackson is pretty pissed about it all despite it working as well as possible, and better than if he didn’t see exactly how the threat of Despot would rear its head. Before Jackson can give Timespan “what-for,” Nadia, the Traveller, pops in to give Timespan chrono-spankings or whatever. Timespan gives her the slip, then takes Jackson several months into the future and then leaves. If you’re sitting there thinking “WTF?” well buddy, I’m right there with you!