this entry covers the “Warblade : Endangered Species” mini-series, which was composed of issues 1 through 4. 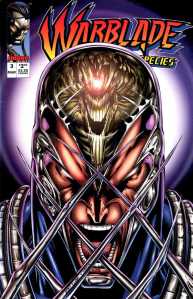 Ugh. This mini-series. Where do I begin? I… don’t like it much. Unlike “Spartan : Warrior Spirit” which I eventually came around to, I just can’t see that happening here. Which, in the end, is rather odd, as I’m a fan of the other work that Steven T. Seagle and Scott Clark were doing for WildStorm. This book, though… this effing book…

Here we have Reno going to Japan to hang out with his old friend Master Kenkichi. OK, they’re not friends, and Reno is just there to give some hot shot student of Kenkichi’s some humility by beating him in a kendo match. Something like that. Really, it isn’t important, what’s important is that Reno sees an old friend named Pillar. Turns out he used to know Pillar, way back in the day. Like back in the time he was a slave to CyberData with Ripclaw and Misery. Turns out he and Ripclaw had a third bestie before Misery came between them, and that was Pillar. Turns out, that on a mission the three of them faced a Daemonite, and that Daemonite took over Pillar’s body and mind. Reno never forgave himself for letting that Daemonite get away in Pillar’s body, and is once again ready to take him down once he sees Pillar in Japan.

Pillar has been a busy boy since he was overtaken. Lately, it seems as if he’s working against a, say it with me, Daemonite splinter group, that want to take over the world in their own fashion. Also, this group has a name, they are The Faction. Actually, he seems to want to take down this group from the inside. It really seems like the old Pillar is in charge when he’s talking to Reno about it. This is also after Pillar killed a whole mess of folks to steal some technology from them. The Faction’s ultimate tech’s name is the Trident, and it is made up of three components, that they call the three Spears. Pillar convinces Reno to team up with him to make sure the Faction can never succeed.

Meanwhile, Ripclaw is messing around with a jaguar in the North American desert and ends up getting kidnapped by the Faction. Dummy.

Pillar and Reno meet up with other Faction members, and Reno convinces Faction member Rodriguez that he’s one of the Daemonites that Pillar killed in Japan, just in a new body. Rodriguez doubts this lie and tells Reno that in order to prove himself, he needs to kill this rando they just caught. Said rando is Ripclaw, duh. While fighting each other Reno and Ripclaw hatch a plan to only make it look like Ripclaw is dead. It doesn’t matter, and Ripclaw’s fake death is overturned in a matter of seconds. While Reno and Ripclaw take out the Faction lackeys, Pillar takes down Rodriguez.

So… what’s the big plan? Pillar has part one of the Trident, there are two other parts, and then a meeting location for the Faction to assemble them. While en route to one of the three locations, Pillar’s plan was to drop Reno and Ripclaw each off at two of the three locations, go to the third and then come get them. Reno calls bullshit, and wants to work as a team, and Ripclaw states that he and Reno will keep the jet and then come back to meet Pillar. Seems like Pillar was doing some straight up TAO shit, because this is exactly what he wants as he parachutes out into the rain forest below.

Now, on to where Reno and Ripclaw went on their wild goose chase for vaporware. Ripclaw is dropped off near a big game hunter named Skinner. He, uh, kills and skins Daemonites. Gross hobby, but it doesn’t take long for he and Ripclaw to catch on that they are not each other’s enemy. Reno finds himself in the house of the Daemonites that burned down the orphanage he was living in, in Japan. Reno makes short work of them, picks up Ripclaw and hightails it back to the rain forest to have some stern words with Pillar. Kidding, they plan on slaying him.

Once they arrive they see Pillar taking down the members of the Faction. Due to Reno being a real jerkface, he reminds Pillar that after the Faction are dealt with he’s coming after Pillar. True to his word, after the Faction are dealt with, he comes after Pillar, but he just can’t kill him. Pillar the Daemonite is still so close to Pillar the human and Reno just can’t perform the killing stroke and lets him walk. As Pillar leaves and Ripclaw wonders why he turned on the Faction, Pillar reminds him that the human Pillar believed in honor, and that carried through after the merge. Pillar believes the Daemonites will win over mankind, but the tech that the Faction had gotten their hands on would make the battle too unfair.

Yup, that it. I mean, there’s a whole lot more stuff with the jaguar and craziness on Ripclaw’s reservation, but it feels more tacked on than all the gratuitous fight scenes in the book. Maybe it’s the length of the book that I find fault with. Maybe a 3, or even 2 issues would’ve worked better for me, there just seems to be a lot of padding on this story. Also, it’s hard to know who to root for, I mean we’re with Reno and Ripclaw all the way, but Pillar keeps us guessing… but not in a good way. His double, triple and quadruple crosses just get tiresome for after awhile.