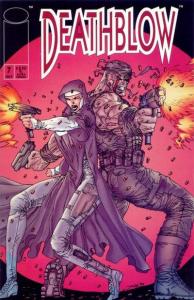 Ugh, where do I start with this one? Yeah, this is one of the longer “runs” of issues together from a single series for this project that usually ping-pongs back and forth between the titles to keep some kind of consistent chronological continuity. The reason for this is that this stretch, once you get to the end of it, never happened. Ugh. I know. Exactly. Maybe “never” is a strong word. Parts of this probably happened… maybe, and most of what came before in this series (issues 0 – 4) mostly happened… I think. See, this is what happens when you wipe some stuff away, but not everything… OK, where to start… I guess we just dive right into issue 5.

So, we are treated to finding out about a young man named Christopher. Kid is amazing, in a Jesus heal-the-sick kind of way, after bringing a drowned orphan back to life. Cray sees this on the news in his doctor’s waiting room, unimpressed. He gets an MRI and is told “Uh… your cancer is worse, sir”. What do you do with this kind of info? Why go out and find yourself a stripper that looks a lot like your ex-wife Gaby. That’s some good thinking!

While this is going on, there’s a serial killer on the loose, he’s named Herod by the media and cops and he’s taking out children. All signs point to him being military, secret military, like an I/O type guy. While everyone seems to think it is Cray for a variety of reasons, we know he’s innocent and that Trickle is the real Herod. Bad news for Cray that Trickle is Herod, because that also means that Trickle is working for the Black Angel.

There’s a lot of nonsense that goes on, backstabbing, double crossing, all that, and if I wanted this entry to be as long as the comics I’d get into it, who’s got time for all that. I don’t, you don’t, let’s cut to the chase. Sister Mary has the magical Christopher and they trust Cray. They get information that they need from Cray’s friends Henri and Ryana and are on the run. Trickle is after them and wants to capture Christopher for the Black Angel, and he manages to kill Gaby. Ok, on with the story!

The Black Angel gets a hold of the sigil headbands that will assist  the Black Angel in getting the Four Horsemen of the Apocalypse going. The Black Angel then tasks his minions with getting the corpses of the I/O men who died in “Deathblow” issue 0 to turn them into the Horsemen. Bad ass idea Mr. Angel! But before the Horsemen start raising hell, Trickle is still trying to take down Cray and get Christopher, all he has to do is wait for them to exit the abbey that they’re holed up in.

While in Montcairn Abbey, Cray is told he needs to confess his sins, as well as what is holding him back in life, and they’ll give to the Holy Grail. This is what Cray’s really been after this whole time, the Holy Grail, a sip will cure him of his cancer. He hits the confessional booth, sips from the cup and he’s getting ready to leave when he’s suddenly ambushed by Trickle, the Black Angel and a ton of demons. Lucky for him Lynch is near with a Black Razor squad. Why is Lynch around? After those bodies were taken from I/O cryogenic storage he and Craven started to think that Cray was involved in something, so they tracked him down. Lynch and his boys join in the fight, but it matters not, the Black Angel gets away with Christopher and Cray knows it is up to him to save the lad. The monks give Cray the Sword of Heaven and let him drink from the true Holy Grail, those wacky monks and their fake outs, before they take off to save the day.

While Sister Mary, Cray and a bunch of monks get ready to storm New York and get back Christopher before the Black Angel can summon Lucifer, we see Lynch put in a call to Jack Rhodes telling him Cray’s going to need some help, call some of our old Team 7 buds! This works, and just as Cray is seeing the destruction of the Horsemen on television, Cash, Slayton and Backlash show up to help. Holy shit, it’s Team 7 versus the Four Horsemen of the damn Apocalypse! It is pretty awesome. I mean, I dunno, this is as crazy and rad as it sounds. I can’t do it words, just go pick up that fancy trade and see this in its glory!

The Black Angel is atop one of the World Trade Center towers, which is a real sign of when this comic was produced. He’s up there to use Christopher’s life energy to open a portal to Hell. On Cray’s journey up, he encounters “Death” and figures out how to beat him. It’s as easy as breaking the sigil head bands. He puts the word out to the other Team 7 members, but they don’t all hear him clearly over their communication system. They all eventually figure it out though. Cray gets to the top of the WTC with Sister Mary and some others and they are having a hard time. Cash shows up to help, dies. Slayton shows up, half skeletonized, dies. Dane shows up and reminds Cray to use the Sword of Heaven, dies. Cray uses it, stabs the Black Angel through the heart and it’s over.

It being over is Christopher trying to undo ever bad thing that has happened before he leaves. He know he can’t make everything right, and one of those things is bringing Gaby back to life for Cray. We found out earlier that during Cray and Gaby’s honeymoon in London Cray got roped into an I/O operation by Trickle. Things went all pearshaped, and in the middle of it all, a young child wondered into the fray and Gaby protected the little bugger. At that moment is when Gaby actually died and she was used a vessel on Earth for the archangel Gabriel. So yeah, Christopher can’t undo her death in the last few days because her actual death happened 2 years ago. Talk about a bummer. Christopher then ascends to heaven and the archangel has some words of encouragement for Cray, which in turn leads to Cray quitting I/O for good.

Ok, so yeah, this is a long story, and it is worth reading. I couldn’t really do these eight issues justice because there’s a lot going on. I’ve criticized some early WildStorm comics as having too much going on that it becomes a mess, but this isn’t the case. There’s just a lot of stuff going on, it all tracks well, and isn’t complicated for the sake of being complicated. It’s the story of Micheal Cray finding his redemption in this world as well as a way to go forward in it.