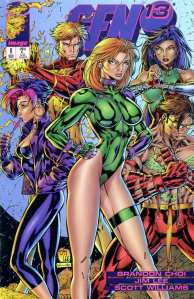 The Gen13 kids are on their way to America, but due to an airport strike, they get stuck in Rome, Italy. Apparently, James McArthur hooked the kids up with a friend of his and Lynch’s to take care of the kids while they wait for a flight home. Mr. Bovini gets the kids outfitted in fancy high fashions, and new haircuts for the ladies, before taking them out to a swanky dinner.

At din din, Grunge acts like a cad and upsets Roxy, but Bobby cheers her up. Speaking of “cheers” the kids share a bit too many drinks. Which results in Grunge throwing up and Rainmaker and Bobby making out until they pass out. The next morning Rainmaker brushes Bobby off, which sends him into a tizzy, leading him to overreact flying straight up into the air, blazing flames. Unfortunately, this attracts the attention of the local authorities, as it is a violation of something or other, and Italy thinks it may be under superpowered attack or whatever.

Our old pals the Order of the Cross seem to have their superhero team known as the Centurions. They’re not fooling around as they manage to capture Roxy, Grunge, and Caitlin. They also knock a whole building down on Rainmaker, which can’t be good. While most of the Centurions team are concentrating on the aforementioned capture of the kids, one member, Domina, is after Bobby. She just about takes him out before he’s saved by an unlikely ally. It’s Ms. Bliss! By “Ms. Bliss” I mean Nicole Callahan and not Hayley Mills.

So where has Bliss been? Well, her, her brother Threshold and their boss Ivana Baiul have been holed up on Caballito Island hiding from I/O. Not only are they hiding out, they’re defrosting and training the Gen-Active kids that Ivana put on ice as Project Genesis was falling apart. Bliss got sick of all that and decided to bounce and tour the world while Ivana and Threshold trained the DV8 kids. Not sure if she was specifically searching the Gen13 kids out with her little “Gen-Active finder device” or she was just looking for other Gen-Actives for the fun of it. Either way, she ended up in Italy just in time to save Bobby’s bacon.

Bobby and Bliss team up to save the rest of the Gen13 kids. As luck would have it Rainmaker ended up falling down a manhole into the sewer as that building was falling down around her. With her safe, she joins the rescue squad to go and find Grunge, Roxy, and Caitlin. The trio ends up breaking into the Order of the Cross by way of the men’s room. Meanwhile, Roxy and Grunge manage to break free due to getting into an actual fight, even though Caitlin thinks it’s a diversion at first. Speaking of fights, Bliss and Rainmaker can’t stop their own bickering for a second, even when taking down a hefty group of the Order’s men. That’s commitment to an argument! 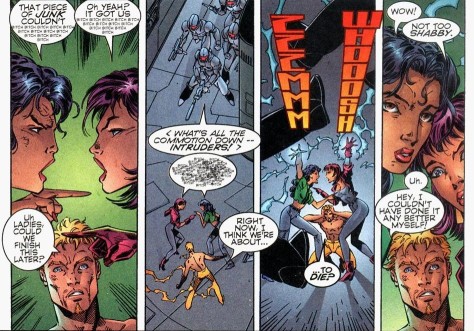 Both teams meet up and are trying to find a way out of this mess. Caitlin is accessing all of their files and is trying to get to more of their top secret ones, but keeps getting blocked. As luck would have it, Bliss knows that Ivana has backdoors in just about every computer network ever created! Bliss gets Caitlin where she needs to be and gets a compliment from Caitlin at the same time. Caitlin then threatens to upload all of the Order of the Cross’s secret information to the public. Since the Order has secrets they’d rather keep to themselves, they let the kids go.

The Gen13 kids, plus Bliss get a private jet from the Vatican to get them back to Cali. While the team is celebrating another win, Bobby and Bliss share a few tender moments near the back of the plane. However; Bliss being Bliss just can’t be pinned down, and opens the jet door and leaps out of it with a parachute, as if to prove to Bobby, you can never predict some girls.

NEXT: “Deathblow” volume one issues 20 and 21 by Brandon Choi, Trevor Scott and Tom Joyner