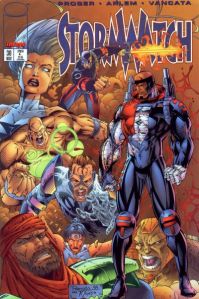 I’m going to start off by saying this. I don’t like these issues. I don’t like them at all. I find them a chore to get through. In fact, I think issue 31 was the issue that made me drop this title when I was a kid. I remember reading issues 28 and 29 and being “Uh… this isn’t exactly the book I’ve been digging… but, it’s still good.” Even then I could tell quality, and those issues were ok, but then this run followed. Ugh. It just seems so all over the place, and oddly paced. Also, there’s a bunch of art mistakes as well (See most of the Continuity Corner below). That and we’re just bombarded by new character after new character, it gets to be a bit much. There is one thing I did like, and that’s the “Synergy” back up story in issue 30, but, sigh, even that has a bit of a problem.

We see Christine Trelane being asked to activate a former StormForce member. Apparently, she’s a seedling. Providence came to the girl that if she isn’t activated, her and her family won’t be around in a year. Christine doesn’t trust Providence at first, but Providence comes to tell her that what she told the girl was true, but also because of the forking nature of the future there are two possibilities. The first, the girl is unactivated, something happens and the girl’s family will be killed, but if the girl is activated it sends her on a road that ends up in super-villainy. Providence leaves this choice to Christine, and Christine comes up with a solution. The solution is… to be continued. We never get any resolution to this short story. It’s a shame too, as it could’ve been interesting. With Barbara Kesel on the writing duties, it could’ve gone far. Dare I say, between this backup and the “Fuji” backup in “StormWatch” volume one issue 29, she has a much better handle on the characters than H.K. Proger (whoever that may be) and might’ve been a better choice to take on the rest of these issues. 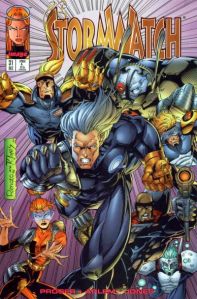 Ok, on to the rest of these 4 issues… A lot happens, a lot. All of our rookies from last issue, along with less recent rookie Pagan, are with Christine Trelane helping the U.N. move some nuclear weaponry that Saddam Kussein has willingly surrendered to the U.N. The StormWatch team is mostly there because the U.N. requested them to, and these losers could use a simple mission after the last on in Germany. Oh, and there are two new rookies as well, Blitz and Damascus. Don’t get too attached to them, they’re going to be dead soon by the hands of Heaven’s Fist, a group of terrorist super-powered beings. Heaven’s Fist works for a terrorist known as Abu Fawaz, whom few people have laid actual eyes on. Heaven’s Fist is stealing these nukes to be used later to blow up various places in the name of, well, terrorism. Heaven’s Fist also kidnaps all the StormWatch members that survive their attack.

Henry Bendix gets the old crew back together, including a recently found and new bodied Hellstrike and a recently released from prison Flashpoint. Henry hooks them up with Unit Aleph, an anti-terrorism group of super-powered beings that work for the Isreali government. Unit Aleph has captured a man they believe to be Abu Fawaz but cannot prove it is him. He has a lot of documents that state he is Jawad Anani, and because he’s only been very rarely seen as Fawaz, they’re having trouble proving him wrong. After StormWatch and Unit Aleph gets some training in, they get the word as to the locations of the nukes that Heaven’s Fist stole. Turns out they’re proto-type neutron bombs that will destroy humans but leave buildings and landscapes intact. 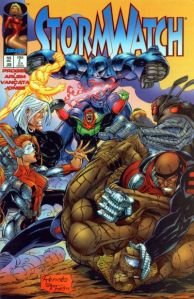 The teams are split to do some good in the world. StormWatch headed towards Yugoslavia to stop a bomb, Cannon and Unit Aleph towards Tel Aviv to stop a bomb and Flashpoint to the kidnapped StormWatch members. Cannon and Unit Aleph make quick work of the Heaven’s Fist members they find in Tel Aviv. Likewise, Flashpoint has zero trouble saving Christine and the rookies from the scrubs that Heaven’s Fist leaves behind. Our regular StormWatch team isn’t so lucky while flying into Yugoslavia.

Yugoslavia does not want StormWatch there. At all. Even though they are trying to help. They keep trying to chase off StormWatch’s jet. Eventually, StormWatch just leaves, but they play it sneaky and manage to leave Winter behind to stop the bomb. Not so sneaky it turns out because former StormWatch member Scythe is aware of Winter right away. She’s quit StormWatch to help her country, but unlike the rest of the military, she’s not dumb enough to let a bomb go off, killing people, over politics, so she agrees to help Winter. Winter of course succeeds but the Yugoslavian authorities are still pissed, so Scythe helps Winter get outta there.

With two of the bombs stopped and the rookies saved, what’s left? Just a single mystery bomb out there, and trying to get to the bottom of if the guy they have in holding is Abu Fawaz. Heaven’s Fist makes their play with the final bomb, and the action is all going down in Paris. So the OG StormWatch save Paris. It’s kinda boring and kinda silly at the same time. Meanwhile, Heaven’s Fist’s sneaky Assassin, Hassasin, is trying to free Kinda-Maybe-Probably-Fawaz from lockup, but he’s stopped Unit Aleph returning from Tel Aviv. Here’s the problem, Bendix has put together that four men have seen the man they have in holding plan the terrorist attacks as Fawas, but all four of these men have ended up dead. One by Flashpoint while searching for the rookies and finding info about the Paris attack. One by Swift while the rookies were breaking out of their kidnapping. One by Jackson while saving Paris. Finally, the last one was by Unit Aleph, in shooting Hassasin. Ergo, Fawaz walks free. So, while StormWatch has won the battle, the war still rages on.

The biggest part of these issues, besides pacing, is the pure glut of new characters introduced. Especially because most of them end up dead as soon as they are introduced. We get Unit Aleph, which could be cool to see again, as well as Scythe, who brings in a new dynamic with the whole “I quit StormWatch, but I’m kinda back now” thing. I think that Abu Fawaz was set up to be a new StormWatch archvillain, which would work well against a U.N. superhero group, so in the end, it is fine when we see him walk. We expect to see him back, but next time with all new terrorist super-baddies because of his huge crew, only three managed to survive. I really think that if Ellis hadn’t’ve come on and taken the book in a wildly different direction we would’ve seen a lot more of Fawaz and Friendz.

NEXT ON THE BLOG: “StormWatch” issue 24 by H.K. Proger, Renato Arlem, and Joe Pimentel