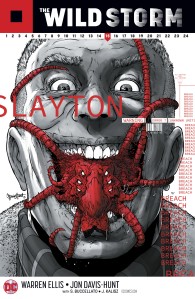 I know, the main point of this blog is to talk about the continuity of WildStorm Universe as it was from ’92 – ’11… but I really like doing this compare and contrast thing! Admittedly, I have no idea where Ellis and Davis-Hunt are going with this new series, and honestly, I couldn’t be more on board with what they and their team are bringing. I just thought I’d have some fun, point out some of the references/differences from the old WSU to the new book “the Wild Storm” that came out last week.

To be perfectly honest, I didn’t see this coming, even if the original Sideways Bob was a creation of Ellis, way back when. While we have yet to see this version of Bob, we already understand from Lauren that he is kinda creepy. “The Wild Storm” version apparently draws lipstick onto space helmets and sings to them, not too unlike the WSU version that used to carry around a manikin head, named Lucile that he treated like his girlfriend. Another big difference is that this version works for Skywatch while the WSU version worked for I/O (before being a free agent for Ivana and then going back to I/O when she took over.)

Andrew Kwok was one of Project Thunder Book’s test subjects who after leaving I.O. took on the name Phillip Chang. In the WSU Stewart Phillip Chang was a member of Team 7 for I/O but eventually left and went underground with half of that team. He eventually went off everyone’s radar and was assumed dead by even his closest friends. So both of these guys are good at hiding, that’s for dang sure. And they both have the same powers, that being telekinesis. Kwok doesn’t seem to be as good as Chang, because Chang could regularly handle multiple things at once, where here it leads to Kwok’s end. Another thing they have in common is that both Kwok and Chang had two boys. 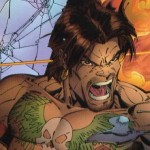 Kwok mentions that he has two boys under his alias Phillip Chang. The one that would be most known to even casual WildStorm fans would be Percival Edmund “Grunge” Chang from Gen13. Other than Grunge he would usually go by the nickname, Eddie. We only have a mention of him, so we have no idea what he’s really like in “the Wild Storm” but we know, much like Caitlin Fairchild, that he is out there, somewhere.

Kwok mentioned he had two boys and in fact, in the old WSU, Phillip Chang did indeed have two boys! We only ever meet him (as Absolom) once, and we’re only let on to the fact that he’s Grunge’s brother/Phillip’s son in a WildStorm sourcebook. We have no idea of Absolom is named Hector or not. This more or less seems like an extra fun little easter egg for us hardcore WSU fans.

Are We Seeing Lynch Get the Idea for Gen13?
When Lynch takes out Kwok he says “I’ll see you kids are looked after.” In the original WSU, that version of John Lynch did indeed take care of the children of his former Team 7 members. The Project Thunderbook experiments are pretty much all the members of the old WSU Team 7, so him looking after the kids seems exactly in character. Is Lynch going to go looking for the Chang boys and Caitlin to take care of them? Is he accidentally building a new version of Gen13 right before our eyes? Considering the solicitations for the next few issues are out, and we’re seeing him confront other Project Thunderbook members that match up to Team 7 members, we really could be witnessing this!

Lucy’s Code
Twice we’ve seen Lucy mention that she has a code. Both times I’ve thought the version in the WSU who was a member of the Coda. I don’t think this is an accident.

The Why of The Mayor

Looks like this new version of Jack Hawksmoor wasn’t “upgraded” by aliens or by humans from the future. Nope, turns out it was Skywatch trying to create a race of humans that can survive on a polluted world. That’s eviler than I thought we’d see from Skywatch… but it tracks with their goals.

Slayton is Indeed Parsing the Word “Khera” as “Carer” 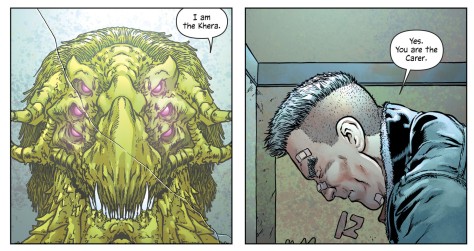 Lynch Having Powers
So far all the Project Thunderbook participants we’ve seen have powers, except for Cole. I was wondering if Lynch had any, as we haven’t seen him display them yet. When Kwok is trying to literally mess with Lynch’s brain he remarks that Lynch’s brain is “weird.” So we know for a fact that Lynch has had something done to him, whether he has powers or not.

The Khera Plan
Kwok mentions that the implant in him wants to colonize. We also know that for some reason Marlowe’s original mission got scrubbed. Not to mention that the Daemon built a machine that creates Technes to keep the Earth safe. I think we have enough puzzle pieces here to surmise that Khera are a ruthless species hellbent on taking over planets. Not only that but we can guess that Marlowe has come to see things a different way, and doesn’t mean to kill and enslave humans, and seems to want to work with them to get past the Gaian Bottleneck. None the less the Daemon created and implemented their “Earth Defence System” to keep any Khera from being able to take over the Earth. Either most of the other Khera died out over time, or Marlowe and his crew killed them all. These remains were found by I.O. and used for the implants on the Project Thunderbook volunteers. The bit of Khera in them still wants to kill and rule. It really seems like all the Khera we’ve met on Earth are either outliers to the Khera cause, or they’re fighting against their baser instincts to get off this planet or live in harmony with it.

I so wanted this to be a reference to Jones Soda that WildStorm had a deal with way back in the day, but that company was established in 1986, not 1977. 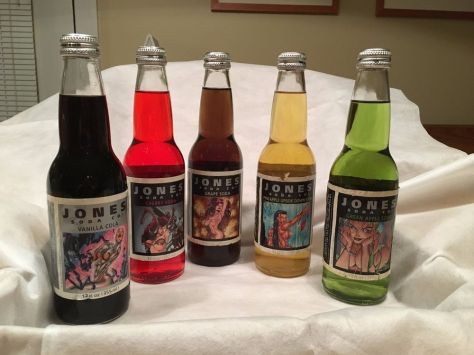 Man, I drank so many of those sodas and I never thought to save a set of those bottles full or empty. Damn. Still miss that pineapple upside down flavor too.